Vladimir Putin, Your Once and Future Man of the Year 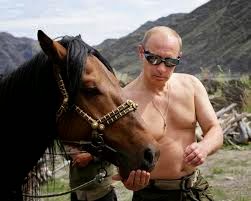 It may interest people of a foreign policy bent to know that Vladimir Putin, Russia's president, has been found to be the Man of the Year for the 15th year running.  This happens against the backdrop of a tumbling ruble and increasingly stringent sanctions, which bode to really fuck the hell out of Russia's economy in a way they haven't seen since the Iron Curtain rusted through in 1989.

So what gives? Why would Vlad still be so popular?

Well, I would say a hefty portion is a damn fine well-managed propaganda set-up and notorious cult of personality combined with actually being a little bit of an IRL badass.  But there is value in milking people's sense of ressentiment, and hardly any better time than economic difficulty to leverage it against a pocketful of dreams about "what might have been if not for the bastards."

Putin is notorious for putting the boot down on dissenters, and his demonizing of LGBT people and the increase in anti-Semitism in Russia suggest that increased economic disadvantages could very well lead to scapegoating of minorities--not blame for Putin himself. The truth be told, there is lemonade to be squeezed out of a batch of economic lemons--among them increased hostility to the West, which makes Russians support Putin because the West put on the sanctions, didn't they? And be defiant about whatever European shenanigans Putin is up to because--economics in the face of world-fuckery against their ability to sell oil. People are proud of their earnings and what they themselves built. Russians are proud of their post 1989 industrialization and the oil boom--why wouldn't they be? And here, in their viewpoint, come people looking to steal all that.

I don't really put it past Putin to weather the present difficulty or even escalate to draw more attention to what a dying superpower can still do with nukes, an army, and the ability to project uncertainty directed at himself, outward. He may very well lose no support, no matter how bad things get, with just the right kind of story.

I know that's kind of screwed-up. But that's how things can sometimes go. It's not to say his economy shouldn't still get trounced for all the eggs in one big petro-basket and a self-aggrandizing push into the Ukraine as if flexing a dystrophic muscle that still moves a little. It's not even to say we should let up on sanctions as if mercy would humble the likes of him. It's just to be prepared that with Russia, an economic war is beyond a regular siege-mentality. Russians all carry stories of bad winters that never seemed to end. You don't try to humble him by humbling them.  (They don't even deserve it). You figure out how to fix the blame smack on him--where you want it and by rights it should be.

Am I saying I know for sure how this is done? Get out! I run a tiny little blog on the edge of Leftghanistan. I think he's not a genius, but he "gets" his territory. And I will easily admit that if people eat grass for Putin's sake that's more than US Americans would do for anyone who was ever our president. I just don't know if Russia would. Or if, indeed, that's exactly what he's thinking they'll do.
Posted by Vixen Strangely at 11:36 PM

American Conservatives love him because he exudes strength. Authority is a powerful aphrodisiac to the Right. They loooooove it. Even if it is demonstrably wrong and destructive.

As to the Russia people, as you point out Vixen, they've weathered terrible times and Putin is providing them a focus and figurehead to recapture their past glories.

Hi Vixen, it is silly that I would feel called upon to say this.

When we American conservatives look at Vladimir Putin we see the KGB. He is using his submarines to threaten our coastline. He has murdered people in the Ukraine. NATO has to launch jets to discourage Putin's incursion of Finland's air space.

He is encouraging alliances with Iran and possibly helping them in their nuclear ambitions. And Iran is crazy enough to take out New York and Chicago if they have the means.

One must discount popular celebrity culture. Putin as a celebrity was encouraged by Goldie Hawn to sing "Blueberry Hill," and he fully realizes that popular culture is a vulnerable underbelly in American culture, just as a number of terrorists have.

It should be obvious on its face that the American right has nothing but distaste for Vladimir Putin. He is one of those little men, like Napoleon, with big and dangerous ambitions.

We get a an awfully distorted picture of world events from our media.

Imagine if the Ukraine's prior government had been one we were on good terms with, for example Saudi Arabia. Then we wouldn't have been reading about freedom fighters and oligarchs. It would have been militants and/or terrorists vs. the government.

Anytime you have a neocon like Mrs. Robert Kagan, aka Victoria Nuland, and $5 billion dollars involved in regime change, you ought to be skeptical about what you're being told.
~

With respect to the apparent conservative "love" for Putin, I'll defer to Doug Mataconis:

who covered it in a few of his blog posts. I would say that Rod Dreher or Pat Buchanan might just attend to some aspect of Putin's socially-conservative leaning KultureKampf tendencies, and actually don't mean to say that overall Putin is a good guy or a good leader. He is a "strongman" in the sense of having leverage over his country's institutions.

It seems that the criticism of President Obama that he is not a "strong man" comes into play--I don't think anyone would be especially happy if he truly acted as a dictator, and he knows that, and defers to public sentiment as a necessary democratic enterprise. Which is why occasional criticism for the Glenn Beck quarter as being tyrannical is laughable. He's "No Drama Obama". His loafer is on the throat of nobody.

Putin, as a former KGB agent, is probably very much inculcated with a sense of nationalism, and keen on setting things to his reminiscence of the USSR's greatness--control of the Eastern bloc.

I don't think he'll get that back, but he might waste resources trying. The Russian banks only have so much on reserve because the oligarchs sunk their money elsewhere--and are also probably heavily bought into Russiya petrol. So, if the Russian oil ruble is worth so much less, should it not follow that the Russian oligarchs are less friendly to the guy who brought all this to a head?

They haven't the equivalent of a Murdoch who will use the media against him because they aren't a free society as such. But with what they have, the oligarchs could build a media that does not let him get away with fuxxoring all that Russia could have for what he wants.

I discount the idea that Putin would give Iran doodly or squat to enact shit, because Iran actually would not use doodly or squat because they know better. The US could glass the actual world a couple times over. It isn't nice and it isn't necessary, and to paraphrase Gordon Sumner, if the Iranians love their children, too--they aren't thinking about it. Don't presume from the "worst case scenario" that the opponent is agreeing--seriously--they take out Chicago, and Cleveland still stands. They take out NY, but Philadelphia is still here. They Launch on Washington DC, but we still have? Atlanta? Charleston? St Louis? But our capability, under ye olde MAD, is to glass all of Iran. The whole thing. Total war.

The point of nukes is to recognize that obliteration of whole areas is possible, and the human response is to realize it ought not ever happen. Most sensible people do get this. I have to believe mankind is not composed of all crazy people. And there is exactly zero chance a nation like Iran has any interest in joining the MAD world where no advantage for them exists, nukes or none.