This One was For the Ladies 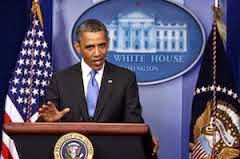 So, what happens when the President calls on journalists that just happen to be the people in the dedicated presidential press-pool who haven't really been called on the most--and they all happen to be female?

But only women get to ask questions--BFD!

Since I think most of us wimmen-folk have similar concerns to men-folk, I will say this is just a cool way of reminding that reporting is a job we can thankyouverymuch do just as well. But it was also a nice backhand at the institutions that tend to consider female reporters as "distaff": rather than serious journos, and don't give sweet presidential coverage spots to women. Because really--asking questions? Not really a gendered activity, is it?  I know I have questions.

Anyway--yay, brief moment of singled-out equality-ishness! And that actually is, however backhanded, my positive spin on it.
Posted by Vixen Strangely at 11:04 PM

I'm sort of ashamed I never noticed the gender of the reporters, usually I was so busy laughing at the inane questions. Helen Thomas excepted.