The Weird Nihilism of ISIL 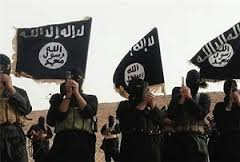 Maybe I have a bad habit of trying to read what messages are being sent when people do horrific things--as if there had to be a logic behind why they do what they do. Sometimes people might just do evil things because they can.  But take ISIL--

They sometimes refer to westerners as "crusaders", but they are the ones taking territory and purging people they find insufficiently faithful and behaving as if they have a goal to spread their banner far and wide. These seem like a kind of crusade, to me. And people sometimes look at their propaganda arm as being "sophisticated". They do post videos and have recruited even from people living in a more westernized or cosmopolitan milieu. But then there's the beheading thing.

Today we learned of the fate of another American at their hands, one Peter Kassig, an aid worker. He took on the name Abdul-Rahman in captivity having been "converted". I have a hard time viewing that to be his legitimate name because I am morally opposed to torture and Stockholm syndrome isn't the same as a purely voluntary commitment of faith. I have a feeling that what Mr. Kassig experienced was not pleasant.

Unlike earlier videos, this one revels in gore. Amongst the boiler-suited captives murdered in cold blood is a man IS says is the former US soldier Peter Kassig, who converted to Islam and changed his name to Abdul-Rahman.

Neither his conversion, nor the fact that he was helping refugees when he was captured a year ago, appear to have saved him.

I highlighted that last sentence because that's what gets to me--if Kassig, as "Abdul-Rahman" (which translates as "servant of the most merciful god") had actually converted, then what ISIL did there was brutally and bloodily murder a brother. Is this a martyrdom? Does it make sense to kill a person who now believes as you do, and was, in any event, not a threat, but working to help people? Does it project strength to do such a thing--or does it rather say that these are people it does no good to agree with, because in the long run they just prefer beheading people anyway?

And if they don't consider him to have properly converted to their way of thinking after about a year in captivity, if he were still a kafir, why lie and say otherwise? What purpose does it serve to boast of his conversion but kill him in just such a way that implies that calling him a muslim is being done to humble him and the culture from which he came. Which is very strange--to use calling him a muslim as an insult!

So, either they are evil people who kill non-combatant fellow believers for no compelling reason, or they are grotesque liars who pervert their faith while killing brainwashed westerners--for no compelling reason. I see no scenario that makes things like this work rationally. I have to assume, then, that truth means nothing to them at all. Anything could be true. What matters is...?

(As an agnostic, I feel really weird faith-checking people, but there we are!)
Posted by Vixen Strangely at 11:59 PM

Tactically, the beheading videos accomplish two related goals. First, the kind of commitment to Islamic jihadi mythology they demonstrate serves to recruit those who are less motivated by the 'all talk' factions.

Second, these videos have been very effective in making the west - particularly, but in no way exclusively America - freak out and over-react. The caliphate has to be at war with Christians in order to mean anything ideologically, so they need to make sure that Christians continue to attack them. Bloody videos produced on home turf are way cheaper and easier than terrorist attacks in the US and UK. As long as they accomplish the same goals, they will be preferred methodology...

Hi Vixen, and mikey, I agree with both of you. I will not attempt to make a Qaballastic analysis of ISIS and evil at this time. (it would be far too lengthy, because ISIS suggests organized, demonic evil in almost every sephirah.)

I will say that I think that mikey is correct, and this is a typical strategy in asymmetrical warfare. You try and make up with terror for what you cannot bring to the battlefield.

The people whose opinion I respect suggest that were we to go back to the Mideast we could cut through them like butter, but they would simply pursue the same tactic and fade back into the population, hide behind women and children, and wait it out until the US left in order to pick up where they left off.

Additionally, the graceful and lovely Alicia explained to me that suicide bombers are drugged and often they are sewn into their vests from the back, so divesting themselves of the vests if they get cold feet is impossible. This is obviously something less than the courage of their convictions and willing martyrdom for a cause.

Even though I'm a conservative, I'll say that Obama's strategy may be something to try. Even George Bush (who we like a lot better than the left does) simply says that we will now have to see whether this strategy is helpful.

Also, I think it would be a very good idea if western nations stopped immigration of foreign nationals, with particular emphasis on practitioners of Islam, but then no one asked me.

The word "crusader" (صليبي) has a different connotation in Arabic than the word does in English, because of the different way that the Arab world experienced the various crusader invasions in the late middle ages. "Crusader" in English mostly evokes the idea of a religiously or ideologically motivated effort, with some idea that the effort is noble even if it might ultimately be doomed. In the Arab world "crusader" is a Western invader who seeks to seize control over lands or people who they have no right to control and to impose their own religion on the indiginous people. The word is really more similar in its meaning to "imperialist" or "colonialist" than what a Westerner means when he or she says "crusader."

(Aside: I have yet to find an Arabic version of a Batman comic (I do have Spider-Man), but I bet he is not referred to as "The Caped Crusader". "Saliibii" is not a word that an Arab would use for a hero.)