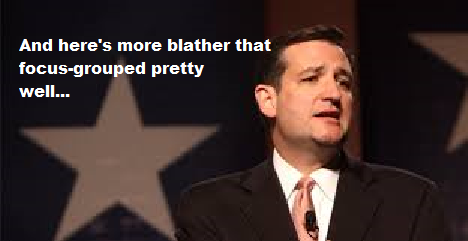 I dunno. Senator Ted Cruz says standard-issue stuff that right-wingers and telecom lobbyists have been saying for years like "Net neutrality is Obamacare for the Internet", and somehow, it's like no one ever said that before. Oh, they have. But it's kind of a niche issue that pretty much tech-savvy people have followed, and Ted Cruz pretty much assumes that if you aren't in the know--he can go ahead and snow you with a line as absurd as:

'"Net Neutrality' is Obamacare for the Internet; the Internet should not operate at the speed of government."

Ok. That's stupid. Net neutrality is basically what we mostly have now, and Obama wants to preserve that. It would be doing away with net neutrality that would result in crappy service and unfair policies like "throttling" that would slow down internet service to certain customers or certain websites based on whatever criteria the internet providers decide on. (Here's an excellent visual explainer from The Oatmeal.) Basically, how much do you love the fees and services you are getting from your cable company? Right. Your internet company is either a cable company or the next best thing, and that is what they will do to your service.

In fine--Ted Cruz does not know what the hell he is talking about, or is really, really dependent upon the idea that most people listening to him do not know what he is talking about. I don't care how cute "Obamacare for the Internet" sounds--it's actually really dumb. And instead of repeating ignorant bumpersticker schtick, it would be really great if we just called a big-bidness toady out for croaking the company line.

Ted Cruz? Ribbit ribbit, you are so toady. And we are not that stupid.
Posted by Vixen Strangely at 10:46 PM

Ok - there are serious practical downsides to designating ISPs as utilities under Title II. And it IS fair to say we're solving a problem we don't have - net neutrality exists as a practical reality today, as it always has.

And it's really hard to imagine that if Comcast, Verizon and Time Warner got in a pissing match with Google, Apple, IBM, Microsoft, Red Hat, VMWare, Intel and a whole bunch of other technology innovators they'd come out on the winning side.

See, here's the thing. Comcast et al has leverage right now because they have made the investment in fiber in the ground. But if Google and, say, Intel, decided to deliver wireless broadband and bypass the suddenly expensive fiber in the ground, they could do it in 18 months. The game would be over, and bandwidth would be essentially free. (Remember when they used to charge exorbitant rates for something called 'long distance'?).

The ISPs don't EVEN want to start that fight, so there's really not much to worry about. And on the other side, if you cap internet profits you probably better be happy with your broadband performance, because there's no longer any serious incentive to improve it.

When was the last time your water vendor made a serious investment in improving water performance?