Climate Sunday: Water, Water Everywhere, nor any Drop to Drink? 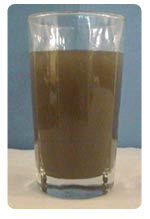 One of the things I try to be consistent about regarding my appreciation for the environment and my real desire that we don't completely screw it up is: we need certain things like water, air and food to live--so let's actually not fuck with them so hard. Funny thing about this is, those are the things that are most directly getting screwed up. Prime example--3 billion gallons of oil industry wastewater got dumped into the California aquifer. That water is used for drinking and irrigation. Agriculture is highly important in California because they serve a lot of our food needs. And the sad thing about the timing is--California is experiencing a major drought.

There's some jaw-dropping stupid involved in screwing up the already compromised water supply of a state that provides a hell of a lot of our food. But this is the mentality we've got since somebody decided to push for the "Halliburton loophole", that made contaminating freshwater supplies with whatever crap fossil fuel industry folks thought was okay (thallium? arsenic? you betcha!) completely legal.

If I dropped arsenic in your soda, I'd go to jail. Oil companies can put who the hell knows what in the drinking water of hundreds of thousands of people and it does not mean squat.

Now, there is some push back. In my own state, activists have suggested oil company folks drink their own supply and see what they get from it. But I'm afraid that bubble-headed anti-regulationists (well-funded by the Koch Brothers, and others) are looking to get into office and unleash even more dirty water fuckery.

I sure would like to think we're smart enough as a people to not vote for more dirty water in this country.
Posted by Vixen Strangely at 12:16 AM

The negative externalities of greed are mind boggling. The number one lesson I learned in my outlaw days was "Don't shit in the nest". You don't bring trouble around where you live. The same ought to be true for pollution, but money is literally more important to some people than survival...

I sure would like to think we're smart enough as a people to not vote for more dirty water in this country.

There's the rub, though.

You want to vote against fracking, and you live in NY.

Frackers own Cuomo, and the GOP. Go around the country and look at the 2014 elections.

DSCC chair Debbie Wasserman Schultz and DCCC chair Steve Israel are pushing every right-wing dirtbag they could dig up, and refusing to support liberals.

They're going to lose, but their benefactors will win. Again.
~