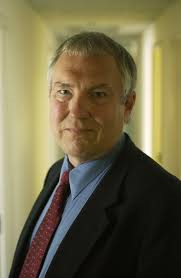 The passing of Ben Bradlee, a great figure of journalism, as the editor The Washington Post when one of its most monumental tasks of public informing was done, namely, the detailing of some of the jackassery in office that was the undoing of the political fortune of one Richard Milhous Nixon, reminds me that anyone might have their moment of doing it just right. Sometimes you just know a story is dead right, and you tell it. For the great series of stories that undid a corrupt administration, he deserves a good part of the credit.

Which is why this post is about Rick Piltz.

Rick Piltz was an employee of the federal government, who realized that something very wrong was being done. Politically-connected appointees in the Bush Administration were misrepresenting the science of climate change. What Piltz went on to detail, was that pattern of misrepresentation, editing, muzzling, and interfering with the job of reporting good science, by politically-motivated hacks.


His ass was hanging out, but he did the right thing. Because the truth matters. It mattered to him, just like standing up to the Nixon Administration, even when kind of understanding how they operated, mattered to Bradlee.

The reason this is about Piltz is simple--in every state, there's some Department of Environmental Something or Other. Depending upon the politics, they have political appointees who are pretending fracking doesn't poison water, or are downplaying the toxicity of mining, or fudging some kind of emissions report--all for politics. They want to muzzle medical people concerned with the health effects of pollution, and reduce to the barest minimum the controls that any regulatory agency can have over the fossil fuel industry.

The truth still matters, though. Sometimes it has to come out, from people who just see that the story is there to be told and understand the time is now. The adulation the breaking of the Watergate story got, is something like what should accrue to whistleblowers who express the shortcomings of those that are charged with overseeing our public safety, especially where our very habitat is concerned.

RIP, gentlemen. You told the truth in timely ways. And your truth mattered.
Posted by Vixen Strangely at 1:14 AM