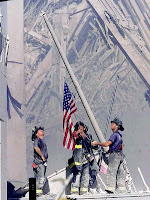 One of the problems with marking anniversaries is that while events never really change in your memories of them, your understanding of them changes over time. With something like the events of 9/11/2001, the enormity of the events gets snowed under, in some ways, by the accumulation of things discovered and the traditions of pious language that inhibit our understanding of what took place. In the midst of a terrible tragedy, people used those events politically, and then sloughed off every criticism as political. Even saying it feels a little transgressive.

Big Bad Bald Bastard made a very righteous post about it at Rumproast. The events of 9/11 effected a lot of people's lives, but didn't "change everything". The deaths of thousands was used to justify bad foreign policy and may very well have been the result of negligence (mind me, I am not a Truther, but I agree they had a lot of the "dots" and didn't connect them) or incompetence. People trusted authority because when shit hits the fan, people come together for support. We want to do the right things and make things better--and those impulses got played.

Bush and Cheney and Rumsfeld and Guiliani and others all basically shared in a collective series of fuck-ups that have to be acknowledged to be learned from. If we don't acknowledge them--we run the risk of some other, future administration of businessmen and bean-counters without sufficient foreign policy experience or appreciation for expertise, ignoring red flags because they don't value facts, and making "tough-sounding" decisions because they aren't really clear on what toughness is:

Toughness was people reaching out to their loved ones even in the midst of life and death struggles to offer messages of love and comfort.

Toughness was first responders pushing their way into danger in the hopes of saving lives.

Toughness was people facing over and over again the scenes of carnage and wreckage in the hopes of finding someone to save.

Toughness was what survivors needed--even when surrounded by loss.

Paranoia, security overkill, combativeness and resolute plans to go to war with the wrong people were never toughness. They were fake-tough. Those decisions were defended and covered in an aura of sanctity because of a ground both desecrated and hallowed, because of lives lost and questions that couldn't be adequately answered, and so were rebuffed with bravado.

We forget too much if we forget that part, too.
Posted by Vixen Strangely at 12:18 AM