There Is A Way To Not Be Designated A Hate Group 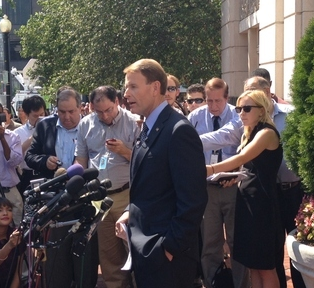 I haven't weighed in on the FRC shooting because I feel just ghastly about all the damn, dumb fucking violence, lately, from the Aurora and Oak Creek shootings, to the Texas A & M shooting, to this frightening attack at the Family Research Council's HQ.  It really just seems like so much, so soon. Trying to make sense or, especially trying to connect the common thread of violence is a jackass game (I'm looking at you, Dave Mustaine) of trying to read something into the minds of unbalanced people beyond the obvious--angry, unbalanced people who resort to violence against their fellow human beings are just wrong, full stop. They might be mentally ill people, they might be people with political leanings or ideologies--but the act itself is wrong. If we don't understand that as a society--we just aren't that much of a society, anymore.

But I will remark on the comments of the head of the Family Research Council, because they rankled me:

“Corkins was given a license to shoot an unarmed man by organizations like the Southern Poverty Law Center that have been reckless in labeling organizations 'hate groups' because they disagree with them on public policy,” the Family Research Council head told reporters Thursday.

I deplore the violence that was visited on Mr. Perkins' organization, as have many LGBT  leaders and allies. I wouldn't wish the fear and uncertainty that he may have felt, or his colleagues may have felt, and I empathize with the sense they may have that another such situation could occur. But I can't help but think of all these other shootings, like Aurora and Oak Creek. Like Columbine. Like Virginia Tech and Texas A & M. Sometimes it really just comes down to unstable people being unstable, and it's tragic, but you see the problem with his reasoning--

None of these other places were the sites of designated hate groups. And the Family Research Council remains a designated hate group--not because of how people feel about them, but because of what they do, which is demonize LGBT people, referencing them as perverts, criminals and liars, and promoting the treatment of LGBT people as second-class citizens.  As long as they continue to do that, they must continue to be criticized, and strongly at that, because that is also wrong. Their maligning of gay people is likely to have "given a license" to the people who have bullied, threatened, disowned, abused, and unfairly persecuted and wronged them--and that is no small matter. It's the difference between the actions of an unstable "lone" attacker, and the micro and macro-aggressions experienced by thousands of gay people, perpetuated by millions who believe they are in the right to treat any of their fellow citizens like dirt.

Seriously, Tony Perkins, I feel for your situation, but if you don't want to be called a hater, here's what you do--

Posted by Vixen Strangely at 12:29 AM