I See What Romney Did There...I Don't Get It 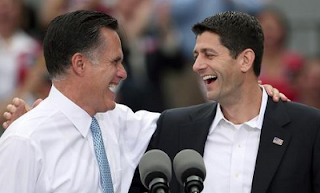 There's something about this whole unveiling of the "Paul Ryan as running mate" pick that feels a little "whirlwind" to me. From the word that Romney was going to announce his pick in VA at the USS Wisconsin  , to the rumors on my Twitter-feed that the pick would in fact be Paul Ryan (and I was like, whoa--head-fake?)  to my actually getting my ass up at 9am to find that it truly was Paul Ryan--it just feels so sudden.  After all the talk about how Romney's pick would be a safe choice (think: Pawlenty, Portman) that doesn't shake things up too much, Paul Ryan seems like a GAMECHANGAHH SUPAHSTARRR!

Which is the kind of thing that makes me wonder. You know, with the polls being what they were (having Romney down by several points) and with the World Tour (three countries worth) going as well as it did,  and with the constant "pick, pick, pick" about what ever could be lurking in those mysterious old tax returns, I kind of got the feeling that the MittCampaign might have decided to finally play that VP Selection card and own the weekend news cycle with how shiny and young and fresh and all their new associate was.

This is good for a weekend news cycle, Team Romney. This card gets played one time, and then you don't get to play it again.  Unless something happens to Rep. Ryan. (I'm not suggesting anything, Christ Almighty, he has a family!)

But in the meanwhile, let's take a look at what other stuff Paul Ryan might be bringing to the ticket. After all, it's not unusual for a candidate to pick a running mate who shores up a perceived weakness. Obama picked Biden to shore up his foreign policy cred. Kennedy picked Johnson to shore up support in the South. What we have as the perceived weaknesses of Mitt Romney is an out-of-touch wealthy technocrat who has no foreign policy experience who is basing his run on the precept that his private sector experience gives him insight into what the economy needs (with scant details as to how.)

What he's picking up is a brash Young Gun with no foreign policy experience who fills in a lot of economic policy details with no private sector experience at all.  Who does not fill the bill on empathy:

Who is Paul Ryan liable to be helpful with? Donors, I think. The Tea Party loves him, and so do the billionaires that invented it.

So much for the pivot to the center--I don't see it happening after the convention either, at this point.
Posted by Vixen Strangely at 7:53 PM

It's bizarre. I don't think Ryan would have any compunctions about throwing Romney under the bus (nor Romney Ryan, FWIW). I honestly think that Romney was pressured into this, and that the powers behind the party are really grooming Ryan for a 2016 run. The economy is still in the toilet, and it would be better for the GOP if the Kenyan Usurper stewed in his own juices while they concentrate on keeping the House and taking the Senate. That way, they could pin the blame on the president and try to bury the Democratic party once and for all.

Sounds conspiratorial, but they are into playing the l-o-n-g game.