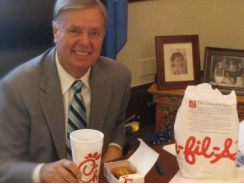 Yesterday, many conservatives took to the streets and to the drivethru's and to the check-out lines of Chick-fil-A, a chain restaurant that is owned by people who are actively against same-sex marriage and who support Focus on the Family, and, you know, the like.  The business received a bit of controversy for that stance, with many LGBT folks and allies saying they wouldn't eat there, and a sprinkling of mayors wondering aloud if they might prevent franchises from going up in their communities.

As for conservatives, they were making abold stance that even though they might not agree with the anti-gay position (but they do, amirite?) they would boldly eat chicken to support free speech.

I can't entirely knock eating chicken for a point. I buy Girl Scout cookies, and I usually end up giving them away--but I like supporting an inclusive and non-judgmental organization that does positive things for girls and the community.

And, you know--the GOP is anti-gay. Is the point I think they were making.
Posted by Vixen Strangely at 7:04 AM