Mitt's a Brick and the Olympics is a Business 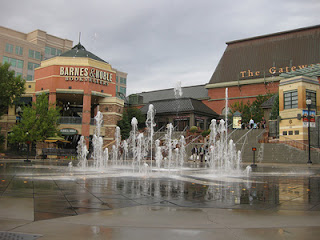 I was attracted to this story via ABC's OTUS Blog regarding the Chinese-made Olympic pins bearing Mitt Romney's likeness for my own wack reasons (Oh, MSM, how do you ever pick up on such interesting stories?), when I espied "new-to-me" information about the extent of the outsourcing. Apparently, one of the fund-raising gimmicks used to fund the construction of various edifices peculiar to the Olympic environs included Chinese-sourced granite bricks inscribed with the names of donors.  In Salt Lake City Utah--which is as near to granite as a very near to granite thing.

Looking further at this Gateway Plaza business (for this is where the donor pavers are situated, and I have no actual issue with the idea of donor bricks--it produces a nice look and provides a donor incentive of recognition in a pretty permanent way, which is really neat for the donors to point out to people or to just kind of quietly feel like a part of a project with) it turns out there is a smidgen of cronyism there.


As Mitt Romney got ready to take his seat in London for the Olympics' opening ceremonies, the focus of the presidential campaign this week shifted to the candidate's time running the 2002 Winter Games in Salt Lake City. Romney is generally recognized as the take-charge executive who turned the Games around after a massive bribery scandal. But there's another side to that record. Romney's campaigns, as we've previously reported, have taken in $1.5 million in donations from the families and business associates of two central figures in the Salt Lake scandal. And documents obtained by Mother Jones shed new light on another of the candidate's Olympic connections—his personal intervention on behalf of his closest Salt Lake friend, developer Kem Gardner, in connection with a key real estate deal.


At issue is the Olympic Legacy Plaza, a public square in the Gateway, a massive shopping/retail/office complex that Gardner was developing at the time. The plaza features the 2002 Games' snowflake logo, a fountain, and a concrete "wall of honor" listing donors and volunteers. No other bids or sites were considered for the project, which helped Gardner secure a multimillion-dollar city tax break for building a public plaza. Romney also wrote a memo discouraging other municipalities from building competing projects, and he helped fill a Gateway housing complex with media representatives during the Games. Gardner, his family, and his business associates have since given more than $500,000 to Romney's campaigns.

The reason I got interested in Romney's helming of the SLC Olympics was because it was the part of his resume that provided his entree into politics.  Since he can't really flog his record as a one-term governor of MA, he's left with Bain and the Olympics. He's been dodgy about his time as King of Bain, yet, since our elections coincide with a certain set of international games, he should be exploiting his successful run of one (like someone ever held an Olympics and nobody came, amirite?).

But I am not myself interested in seeing him have anything to run on. So investigate his Olympics, I have to.

What I won't do is diss Rafalca, though. I like animals. If Rafalca is a good horse who likes to dance for people, this is not my issue. I only care if the critter is well-treated and loved and all that. I think Ann might love this horse, and I hope has seen to its good treatment, even if Mitt doesn't seem too interested.

But the participation of a Romney horse in the Games is probably also a story about privilege. I expect there may be more information about the 2002 Mittlympics.
Posted by Vixen Strangely at 12:13 AM

The reason I got interested in Romney's helming of the SLC Olympics was because it was the part of his resume that provided his entree into politics.

Yeah, it's amazing how Mitt's accomplishments seem to fall apart under scrutiny. I imagine he's going to rue the day he decided to get involved in politics at the national stage, because his "legacy" is bound to take a hit. I'd feel bad for the guy, but for the fact that he's a world class prick, and he was the guy who initiated the "quotes out of context, facts be damned" campaigning style.