Mitt Romney is: The Ugly American 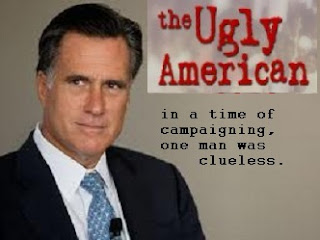 Going over the past day's worth of unforced errors the Romney Campaign made, I'm struck by how well Mitt Romney's unique tin-eared quality genuinely reflects the stereotype of the "Ugly American".

Consider this: he disparaged the security situation for the Olympics in London--

It's kind of clear what that's about; he's comparing the 2012 Olympics to his own 2002 experience heading up the Salt Lake Olympics. In a way, it makes sense for him to talk about his resume during a campaign, but in a broader sense--seriously? You're a guest in that country, hosting the Olympics are a point of national pride (as Romney should well know) and that's just a boorish way to behave.

But it's not just Romney being self-important--it also reads as "Gee, we figured out how to do it in the US--I hope you people don't cock it up."   For a value of "you people" that measures units of not being American.

Also, he pretty clearly wasn't paying attention to who all he was speaking to in one instance--calling Labour leader Ed Miliband "Mr. Leader" and in one instance, paid too close attention to who he was speaking with, by mentioning a meeting with the head of MI6, which simply isn't done.  It shows a lack of concern for the other country's protocols and a disregard for diplomacy.


He's also leaned a bit hard on the idea of a "special relationship" that sounds a bit more like what one says when about to touch a family member for cash than an understanding of a political alliance. The "Anglo-Saxon" comments of some still-anonymous adviser aside, judging from comments by Prime Minister Cameron, re: the Olympic Games, that relationship is touchy where a possible future relationship with Romney is concerned:

"We are holding an Olympic Games in one of the busiest, most active, bustling cities anywhere in the world.

“Of course it’s easier if you hold an Olympic games in the middle of nowhere.”


And of course, the mayor of London was none too pleased at Romney's unfortunate comments as well:


As some bloke from a small island which doesn't sell anything anyone wants once said, "Comparisons are odorous", and one would be making a miss if failing to point out that when then-candidate Barack Obama made his "world tour" in 2008--he spoke to cheering crowds of tens of thousands. And thus far, candidate Romney has been jeered by a crowd of tens of thousands--mercifully whilst he was not there, but still.

Romney has been possibly most comfortable amongst his high-dollar donors at his fundraiser--although perhaps uncomfortable at dropping the price for that last handful.

So we have a boastful, complaining American tourist who doesn't understand the mores of his host country, who views other nations based upon what he can get from them, and who has become a figure of fun because of his silliness.

This does not seem an auspicious outing, thus far.
Posted by Vixen Strangely at 12:41 AM