Getting to Know Mitt Romney--NAACP Edition

So, Mitt Romney gave a speech at an NAACP convention, and except for the booing, the patronizing, the alienation, and his comments afterwords, it wasn't the worst thing he could have done.

Here's where the booing happened:

He thinks health care coverage is non-essential.   That's so....probably cybernetic of him. I'm going with he's an outer space robot that doesn't know people get sick and it costs money to get them well and stuff.

Also, he forgot that the NAACP recently endorsed marriage equality--or just forgets which side he's on:

Probably one of the weirder privileged-guy quotes of the day was  this one:

I believe that if you understood who I truly am in my heart, and if it were possible to fully communicate what I believe is in the real, enduring best interest of African-American families, you would vote for me for president.

See, I chalked that up to Romney believing that it's the job of black people to find out about Mitt Romney and try to meet him (all the way, really) at least half-way, instead of him bothering to understand their concerns and issues. But wouldn't you know it, after the speech at the NAACP convention, he has a little something different to say at a fund-raiser: 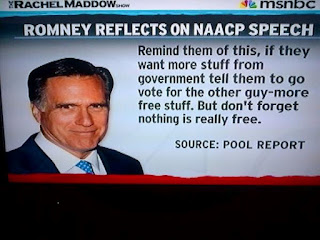 You know, when bloviating ego-monster Newt Gingrich said he would go in front of the NAACP and whitesplain to them about why they should demand paychecks instead of food stamps, I was all like, I would pay admission and take bets regarding the outcome of that nonsense. It might have been something to see Mitt Romney say that in front of them--although in real life, I suppose we all know how he feels, now. I'm not sure why he feels like this particular community likes "free stuff" instead of recognizing that they are also taxpayers and workers, but I do suspect that if I spent any time wondering, I'd be checking his assumptions longer than he ever did.