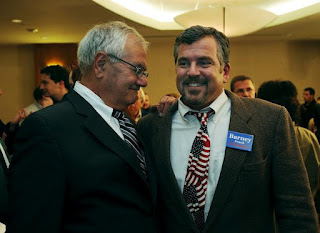 Call me a romantic, but I'm happy to see these kids getting hitched.


Massachusetts Governor Deval Patrick officiated the ceremony and added some levity by saying Frank, 72, and Ready, 42, had vowed to love each other through Democratic and Republican administrations alike, and even through appearances on Fox News, according to Al Green, a Democratic congressman from Texas.

"Barney was beaming," said Green, who attended the ceremony. He added that Frank, a champion of gay rights and the sweeping reform of Wall Street, shed a tear during the ceremony.

After exchanging their vows, Frank and Ready embraced each other, Green said. "It was no different than any other wedding I've attended when you have two people who are in love with each other," Green said.

Frank, a Massachusetts Democrat and a former chairman of the powerful House Financial Services Committee, has been an openly gay congressman since the late 1980s.


By which I mean, these adult men with every reason to suppose they know what the hell marriage is and why they want to do it.  On one hand, I wish them every happiness, and on the other, I want to flip off everyone who is against gay marriage every time another takes place--is that wrong?

(I facetiously asked, not even thinking it was.)  But I really do have an especially tender place in my heart for Rep. Frank as a truth-teller and a person who we will miss when he's retired from Congress, and absolutely am happy for him being happy. (Although I was surprised to find that he's 72--seriously? I thought he was like, 60-62, tops!)

Posted by Vixen Strangely at 12:45 AM

God help us all.