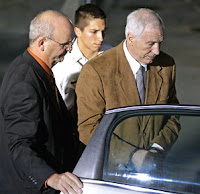 I think anyone who followed the trial should have come to the conclusion that many did after the Bob Costas interview: that Jerry Sandusky is a messed-up individual and that he's done some heinous things.  I think it says something about rape culture and the denialism that exists regarding it that advocates for the protection of children, the prosecution of child rapists, and general cynical people who pay attention to these matters--might feel like this is really something. Amazing, isn't it? Someone who has apparently done multiple, horrible crimes--actually is brought to task for it.

Pinch me. Here in the Philadelphia area, just yesterday, another child rape case, this one against representatives of the Catholic Church, was decided. And finally, a Roman Catholic Church official has been found sort of guilty in a saga of child rape that has spanned decades.

I know I sound a little bitter about these things happening here in Pennsylvania. It is significant that these juries found culpability in these cases, and that victims were believed--

But it falls just a little short for me.  It's not that I need to see the accused ground down into the dirt--it's just that these things don't happen without institutional support.  It's not institutional inefficiencies that let them prosper--I think it's a case of some actual widespread "understandings" that lets abuse of children exist. And while I'm satisfied to see direct participants in child rape's execution and cover-up sentenced and punished for what they've done or allowed to be done--

And I get that some alumni and supporters of Penn State might feel like the worst of this is over and closure is about to begin--but I don't think it's time for closure just yet.  And for Dottie and Matt Sandusky, and for other children, some now grown, that he's hurt, it isn't over yet, and if there are appeals, it isn't over yet for those who have already testified, one time, (and how much did that already mean to them?) that will have to speak to their pain again.

It's a mixed decision is all. It always is.
Posted by Vixen Strangely at 7:14 PM