So, this Secret Service Scandal-- 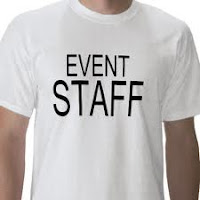 I've been vaguely paying attention to this Secret Service/military partying with prostitutes scandal, because I have the feeling this probably has been going on for some time. It strikes me that there might just be a machismo factor to the behavior we're seeing here, and I don't really suspect that this is something new because of, for example, gays in the military (let's be honest--when all one has is a homophobia--every problem looks like a gay problem--Tony Perkins is just a weirdo on the subject).

Anyhow, I might as well weigh in with my theory--I think the Secret Service got to thinking they were like roadies or backstage security for a rock band instead of officers in charge of security for one of the most important offices we have--the presidency.  We call popular politicians "rock stars" sometimes, and there may even be political groupies for all I know--but that doesn't change the stakes. Politicians might be accessible to the press like never before and lionized and celebrated--but that doesn't change the security responsibilities of the Secret Service detail. They still are required to anticipate that people with political power are also people with particular vulnerabilities and security needs.  And that, in turn, means not letting the President, his family, and the American people down, by compromising their positions. In the olden days of the Cold War, I'm pretty sure SS guys were trained to anticipate a Commie spy under every garter belt.

Contrast that, with the current scandal, which was largely brought to light because a Secret Service agent disputed the fee for the services of a carnal entertainer. ZWUT?  This only makes sense if this guy thought he was a part of an entertainment staff-- "I'm with the band--I don't pay for it."

But the fuck with the idea that anyone in the Secret Service actually is "with a band". The president is not a "band", nor is his family,. And the protection is not merely from groupies and stalkers, but even terrorists and international intrigue.  They have to be prepared for the worst--not opening up the president, or anyone who they are supposed to be protecting, to a security problem. So this issue is a big one--

And yet, obviously, not one the president should have blame for--after all, he benefits from a crack SS team, not hard partying jerk-offs using foreign hookers and without accountability. Of course, he would rather his family have the most upright people guarding them.

This is such a dumb scandal.
Posted by Vixen Strangely at 12:40 AM

I've been vaguely paying attention to this Secret Service/military partying with prostitutes scandal, because I have the feeling this probably has been going on for some time.

Prostitution and military action have been intertwined since the beginning of civiliation. In this case, it's a toxic stew of racism and sexism (This article, while about Asia and the Philippines, is a good, though depressing read).

I think, in this case, you have overly entitled "ugly Americans" abroad, thinking, "We're in a Third World shithole filled with pretty little brown girls, let's get our jollies." The fact that they tried to haggle with the "entertainers" just drives home the awful attitude of the men involved.

The U.S. has a well-nigh insatiable apetite for sex and drugs, and unfortunately, many Americans view developing countries merely in terms of these apetites, with the population of those countries as nothing but toys to be trifled with.

I think I have to expand this into a post...