Gov. Rick Scott Demonstrating that the War on Women is Just a Figment of Our Collective Consciousness 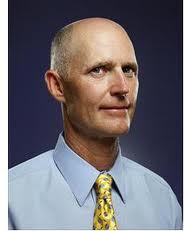 So--imagine a bill comes to your desk allocating more funds for rape crisis centers. Attached with it comes the explanation that services to victims are underfunded.  The total--$1.5 million.  In a state like Florida, what's that?


A spokesperson for Scott said he vetoed that particular line item in the state budget because the state already funds sexual violence programs, and nobody was able to make it clear to him why rape crisis centers needed the new funding.

"Governor Scott approved funding for many projects that have statewide impact and do not duplicate programs already funded by the state," Lane Wright, Scott's press secretary, told HuffPost. "This new funding of $1.5 million would have been duplicative, since, as a state, we already fund sexual violence programs. There was no information suggesting any needs in this area weren’t already being met. The state already provides about $6.5 million for rape prevention and sexual assault services. That is in addition to the funds available for domestic violence programs -- $29 million to be specific. Many victims of sexual violence seek refuge at domestic violence shelters."

Jennifer Dritt, the executive director of the Florida Council, said she was "stunned" and "confused" by Scott's move and that she questions his reasoning for slashing the funds.
"We say 'here's the need, here's the need, here's the need,' and frankly, nobody's paying any attention," she told HuffPost. "We gave them information about the number of new survivors we have and we showed them that these rape crisis centers have waiting lists. Survivors are having to wait weeks, sometimes six weeks, in some programs three months to be seen. We included quotes from the programs about the waiting lists and what services they weren't able to offer because of a lack of money. There is clearly an unmet need."


You can see where he really considered the information he was presented with--not. As far as the funds being "duplicative" (is this a word?), they were intended to shore up existing programs that had increased need--not creating duplicate programs.

I know simply vetoing funds is kind of thin gruel, especially when more outrageous things are happening in Florida all the time.  But on the other hand, this kind of shows that even when GOP officials aren't actively harming women with their policies--they sure aren't going out of their way to help.