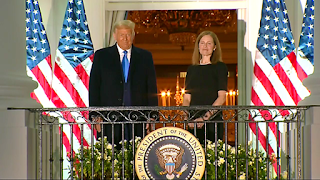 I probably have a lot more to say about recent events than I want to or should right now, but I will say this: knowing that her selection and rapid confirmation process right before the election is a big political issue, and realizing that this White House event is yet another way Trump using his office as a staging place for campaign photo ops, is this the image she wants associated with her time as a Supreme Court Justice?

Because regardless of claiming she will decide without fear or favor and based on the law and not her own preferences, this image is one that will taint things.

I want Democrats and liberals and even just folks who don't think the court should be partisan to let the image of the newest justice standing with this particular President on a White House balcony, not so many weeks from the super-spreader event that was her nomination, at this particular point in American history, really sink in.

If this image was her choice, it is not great. If it was chosen for her, to be lashed to the president who put her here in such an indelible way that her independence is questionable, it is still less great. I do not like it, but Mitch McConnell was very clear today on how much people's feelings count when compared to the consequences of elections.

Posted by Vixen Strangely at 11:42 PM