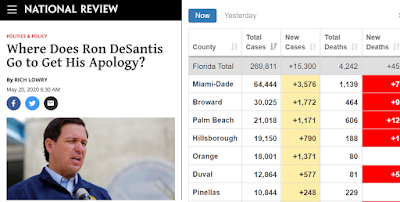 If Florida were a country, it would rank fourth in the world for the most new cases a day behind the United States, Brazil and India.

Its daily increases have already surpassed the highest daily tally reported by any European country during the height of the pandemic there. Florida has also broken New York State’s record of 12,847 new cases on April 10 when it was the epicenter of the U.S. outbreak.


The reality for the state from this point looks dismal, and yet, is really feels like some people are not living in reality:


Anti-mask activists in Florida took their campaign over the weekend to a grilled cheese bar whose owner said she would not require customers to wear masks, even as the state reported more than 15,000 new cases in just 24 hours on Sunday https://t.co/Ma408N6K7T pic.twitter.com/fsUKNShj9R
— Reuters (@Reuters) July 12, 2020

It's hard to tell to what extent we're looking at a failure of intelligence or a failure of courage to contain the spread of the virus, because, sadly, they look the same. And believing that distancing and masks are so much rubbish and that the virus isn't so bad, really, doesn't actually spare anyone. Coronavirus-deniers also catch the disease, and they die, too.

Leadership from the president on this wouldn't hurt, and I guess it's nice that he finally wore a mask, but the White House is simultaneously slagging one of their best experts with an apparent smear campaign and demanding the reopening of schools where it can't be determined safe or wise to do so.

This has to be where states take the initiative, even fighting back against Trump when it seems clear that he has more or less checked out on doing anything even halfway right about this crisis.

I have very little hope that DeSantis is the kind of guy who can do whatever it takes, though.

There was a comment made some time earlier on and often repeated earlier in this crisis that not all states were New York, to the extent that what worked for one state might not work for others because of differences in geography, etc. But regardless of those differences, the coronavirus spreads from person to person the same way in every state. And these numbers....

They are very bad.

UPDATE: I know I didn't mention Disney World reopening because...damnit. I don't get it. I just don't get it.