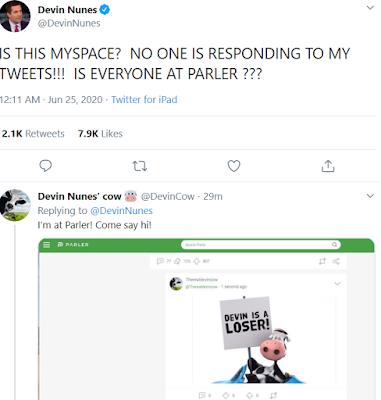 One of Trump's especially dumb toadies, Rep. Devin Nunes, had the extraordinary stupidity to file a suit against parody accounts purporting to be his cow and his mom, and for some reason, he also sued Liz Mair, because they said mean things about him. The parody accounts, as a result of the attention from the lawsuit, did not in fact die, but became more powerful (followed) than Nunes anticipated (see "Streisand effect"). It was recently determined that there was no real way to find out who Devin Nunes' cow actually was, and a recent ruling decided that Twitter was not to be held liable for what randos post there.

But the grotesque little point to his exercise is twofold: to purport that social media habitats are biased against conservatives because, I guess, accounts critical of them exist? And to try to shift bias rightward.

I have been following the foofaraw about Section 230 for a minute, and have some feelings.  I have existed as a semi-anonymous pseudonymous personage online for over 20 years, at this point, for a dozen on this blog. I think anonymity for non-public figures helps enable free speech without individual penalty and the toll to an internet persona should be reputational for that persona. Providing critical content, even derogatory content, shouldn't be censored so long as it isn't a threat of actual material harm (beyond hurt feelings or whatever). If you are stalking, making terroristic threats, are a straight-up criminal--okay--that's different. But just saying mean stuff? Give me a break!

Conservatives have been alleging "liberal media bias" for as long as I can remember, so claiming social media bias isn't a big shocker. But knowing how the internet or social media works, it means they are kind of pointing out that they aren't actually that popular and are getting a lot of push-back, and when they explain they are going to flounce off to Gab or Parler or whatever, it's kind of like "Welp, let's fuck off to wherever they banished the neo-Nazis to." Because  the thing where people get kicked off of social media? It's not for bias, it's usually for being a damaged tool that that can't even play well with others.

So anyway, am I saying Devin Nunes is definitely a damaged tool? Well, I'm not not saying that! But his district should seriously consider whether a person with a lot of time on his hands to fuck around about internet cows has any bandwidth left for his constituents.

Posted by Vixen Strangely at 1:29 AM

As stupid as he is, I'm sure he knew the lawsuits would draw attention to him. These are pre-planned demonstrations that are meant to be enjoyed by his followers.