Apparently, this was a thing on Laura Ingraham's show the other night, which is really weird, because Weather Underground hasn't been a thing since the 1970's and this curious to-do list, culminating in, amusingly enough, "Attack and dethrone God" doesn't necessarily line up with all of the goals of the group--like, I wonder about "The weapon of choice--systemic racism and police racism." Pointing it out would be the actual weapon here since it's part of the structure that has to be changed, but I quibble.

Look, it's 2020. We can literally turn on a device we carry in our pockets to view evidence of police brutality and racism. Human beings are miserable to one another. And I don't even think the people who uphold that viciousness do it for the sake of upholding capitalism--they do it because they can. Because it fits a hierarchy that needs to exist for them, a pecking order, if you will. A top-dog, bottom bitch order, a cosmology into which one can also fit misogyny and homophobia and transphobia.  They do it because it gives them, for what it's worth, purpose.

I don't decry systemic racism and police brutality as a leftist--I do it as a moral person. To my mind, all persons are equal in their humanity and the fragility and dignity at once of their lives. Religion can decry racism and support human dignity.  It doesn't always, and has been used to reinforce the hierarchy as well. I just don't happen to believe. But viewing The Left as "attacking and dethroning God" strikes me as being an awful lot about calling liberals "socialists" and "godless commies" and claiming that leftism lacks a moral impetus. It's a pretty long-standing trope.

It's one I've seen the White House use, lately. Kayleigh McEnany recently described the WH press pool as a room full of people who desperately wanted churches to stay closed, trying to play on the idea of the so-called "liberal media." White House counselor Kellyanne Conway actually dressed-down a cleric for her opinion of Trump's photo-op, by trying to pose as morally superior for being able to temporarily forget what a photo-op is.

To both of them, a part of me even came close to wanting a deity, to presume upon them: "If you do believe, don't you think your god can hear you lie?"

I mean, are we really in 2020 going to arm wrestle about the Great Chain of Being and all that?

*Sigh* Not me, babe. I'm all about the Enlightenment values all day, everyday. I thought we already won this one. But since I'm off-gassing about the right-wing fuckery once again, what about the Antifa hoaxes?  And does Trump and them actually believe that shit or what?

I'm for yes. Paranoid style and all that. After all, poster child of "whatever happened to" once decent journalist Lara Logan is straight-up passing on Antifa bullshit like a MAGA hatted Qanon Facebook aunt no longer invited to the family reunion. And apparently elected officials close to TrumpWorld just trust and believe in random circulars 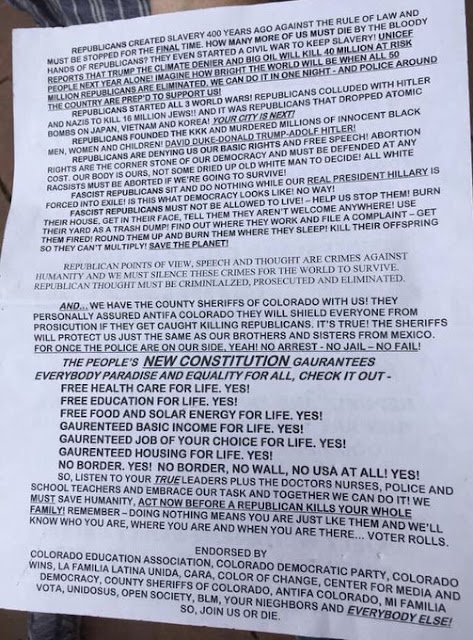 stuffed under their windshields, so good for you, future Tony Alamo fan club guy. (And this dude tagged in all of right-wing media like "Yes, please, report on this thing I found like it was real because um hm! Real!") (No I'm back in my parentheticals--"Fascist Republicans must not be allowed to live!" all caps wow! This is serious business worthy of your immediate attention! YES! It reads like a Bronner soap label taken over by Glen Beck's blackboard: scary shadow Soros operative, only very obvious and projecting.)

My blog's too short to box with God. I used to do more atheist posts maybe a decade ago. But I could goof on dumbasses who think the Antifa hordes of "The Left" including Hillary Clinton and Nancy Pelosi and the Squad and lots of other, mostly female and POC folks, are attacking God and man all day. And I remain, as ever, antifascist.
Posted by Vixen Strangely at 1:46 AM

There are no gods, only fairy tales.

Vixen, my best friend was the roommate of a Weatherman who helped break Timothy Leary out of jail to go to Algeria to be with Eldridge Cleaver.

Marx said that eventually capitalism would fall, and we would be in a cashless society that was a worker's paradise. He said that one could wait for this to happen, but that it could be pushed through by violent revolution.

The Weather Underground was trying to have such a revolution in order to try and secure a communist future for the US. Marx created a division out of labor and capital. Originally the emphasis was on helping people in labor to throw off their capitalist oppressors.

Like most of the things Marx wanted, it simply did not happen. Today you are more likely to see laborers at a Trump rally. And the division between capital and labor has disappeared with things like pension plans invested in the stock and bond markets and middle class investment. Today everyone with any sense has a balanced view of capitalism and its possibilities.

Groups like Antifa (which has its philosophical origins in former USSR satellite East Germany) understand that dividing the country by capitalism and labor no longer accurately portrays the reality.

So they are using other devices to try and start a 'class' warfare. Polarizing blacks against whites, just as they have done with creating divisions by environmental mandates. With class conflict between labor and capitalism no longer being applicable, they have set out to find other avenues of division that can be exploited to try and hurt the American people and inspire their loyalty to ultra-leftist causes. It's really just the same old trick using different ponies.

Fortunately, the American people no longer have a huge response to this trick because they've seen it all before. Still, you can get enough naive people and unlearned romantics to make a lot of street noise. Revolution is the opiate of the intellectual.

Theologically, it all comes down to what you mean by the English word “God.” People would be amazed if they understood the venues in which this word can be understood, and of course from that definition would flow various possible assertions.

How dare those Marxist bastards force four white cops to murder an unarmed black man in broad daylight in front of witnesses with cameras!

And hey, Amherst called... they said that fucking idiots like you are disgracing their reputation...

Theologically, it all comes down to what you mean by the English word “God.” People would be amazed if they understood the venues in which this word can be understood, and of course from that definition would flow various possible assertions.

Neither that pathetic right wing graphic, nor the comment from the "best friend of a roommate of a weatherman" have much of anything to do with the real organization.

I am getting up in years now, so I will just state for the record that I was a participant in the meetings in Chicago at which the Weatherman was founded. I realized at that time that it was a dead end, but at least I was there, and continued to know people who regarded themselves as members. In truth, the Weatherman, and what their followers believed was utterly irrelevant to what was going on at the time, and is a hundred times more irrelevant now. But this absurd adventurist advocacy of violence on the part of two hundred people or less, in a movement that mobilized millions, is still tied around the necks of every liberal in the country, while Republicans feel free to deny any responsibility for the constant violence wreaked on their behalf today, and egged on by their President.

Hi Vixen,
this dichotomy between Republicans and Democrats is simply something I do not accept. There are more than 2 opinions about temporal life. Thank God.

Orthodoxy to the orthodox,
Heresy to the heretic,
But the dust of the rose leaf
Belongs to the perfume seller.
– an old Sufi proverb