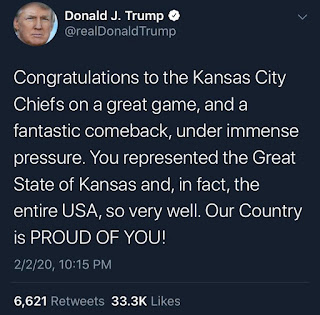 After discovering that sneaky Kansas City had been in Missouri, Trump deleted his Tweet, which I guess is better than trying to change the map by executive decree or something. I don't know what we expect. This is, after all, the guy who Lamar Alexander said on Meet the Press just wouldn't know you're supposed to go to your own Attorney General regarding suspicions of corruption against a US individual. But you know. He'll learn from all of this.

Baby steps for a toddler president.

In other funny things from the Super Bowl, I've seen some pecksniffery about the half-time show out on the intertubes.

It's always weird here in the 21st century to hear about them skimpily-clad jezebels with their jazz dances, destroying the morals of our youths.
Posted by Vixen Strangely at 8:46 AM