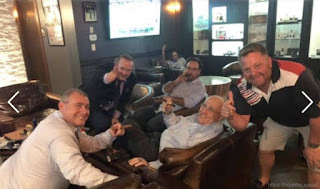 There has been some dispute that Nancy Pelosi was correct in making the decision to hold on to the articles of impeachment until achieving some likelihood of there being an actual serious trial undertaken in the Senate, with witnesses and the whole shebang. I'm of the opinion that Pelosi knows exactly what she's doing, and that it would be wrong to try and "characterize the strength" that she brings. More developments have unfolded in this time that have proven her surmisal correct--given enough time, more shoes would drop.

And so they have--like the docs that showed that the Pentagon was concerned that the president-initiated hold on the aid to Ukraine would be in violation of the Impound Control Act, and which added to the already-incriminating timeline.

As it turns out, our understanding of what Trump, his personal attorney Rudy Giuliani, and others were engaging in in the region is still expanding. House Dems have now released some information received from indicted co-conspirator Lev Parnas, which really casts a disturbing light on these events. Among these documents is a letter from Giuliani in his capacity as Trump's lawyer (specified by him as a capacity separate from Trump's office--as in, on Trump's own business, not the country's) seeking a meeting with Ukraine President Zelenskyy, and also information that strongly suggests that Ambassador Marie Yovanovich was basically being stalked and that it was possible some harm might come to her (which definitely lends some depth to her own testimony of the urgency with which she was told to leave Ukraine).

And this is just a piece of the information yet to be revealed from the Parnas trove. This individual apparently knows about some creative campaign funding that has taken place with respects to certain GOP figures.

Not hearing more from obvious people who should be able to better depict Trump's involvement in the scheme (such as John Bolton or Michael Duffey) starts to look like a cover-up when so much illicit activity was clearly taking place. It makes apparent co-conspirators out of Senators who are just fine with keeping the discussion away from the curious eyes of the public.

It is an important political calculation for them to consider as we shift our attention to the elections. It seems like Russia is, once again, looking to do 2020 candidate Trump a solid by hacking the energy company that placed Hunter Biden on their board. (This, in retrospect, only legitimizes the claims that Russia put their thumb on the scale in 2016--and now they are just protecting their investment.)

Republican Senators might by and large prefer not to take action that looks like they are not supportive of Trump, but they should look again. It's their own behinds that might be hanging out.