Look, before tonight, I just thought of "three-way privilege" as a thing some couples engage in to keep things interesting when toys won't suffice. But this has always been a very fascinating part of the plot, to me--it's like somebody came up with the idea after discovering what attorney-client privilege was and said "what if you were going to do crimes, but all of the people you did crimes with....were your lawyers?" 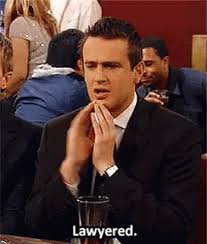 I know this is probably a serious reach, and I didn't even take first-year law. I took first-season "Law and Order". So, was this just the kind of "shit that won't stick" argument thrown up to keep the patsies shtum up until they got banged up?   Sounds like it to me, and apparently, sounds like it to Parnas, too.

I'm not actually going to be able to contribute anything non-snarky about this. Sorry.

Posted by Vixen Strangely at 11:20 PM