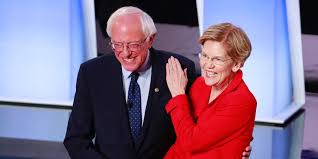 Maybe it's because as a Pennsylvania voter, I don't get to vote in the primary until pretty late, but my feelings about the candidates is a little bit like when a neighborhood cat deposits kittens under the porch: "Don't get too attached to any of them--we're only keeping one."

So how do I feel about the Sanders-Warren foofaraw? I don't actually have a really strong opinion because only one person will win the primary, and then my preference is that whoever that person is, they beat Trump. It's pretty much that simple. This "beef" thing is kind of like wrestling: I don't know how much of it is work and how much is shoot, but I will vote for a Democrat when the time comes regardless, and recognize that primaries are competitive. They're trying to win. It's not that deep.

So, long story short, my opinion is, either you think Senator Warren or Senator Sanders are both highly qualified and would do better than Trump, be more credible, transparent and respectable than Trump in office, and surround themselves with more professional, less questionable people in office, while engaging in a substantive, progressive agenda or, well?

Eh. I like them both. I can't stand Trump. The end.


Posted by Vixen Strangely at 8:34 AM