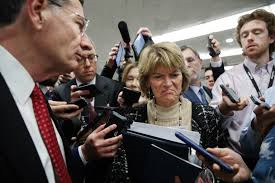 So, the word is, everything was going swimmingly with Rep. Schiff's closing argument until he shockingly said something that was reported on the news, that he admitted he didn't know was true, and said he rather hoped was not true:

“CBS News reported last night that a Trump confidante said that GOP senators were warned: vote against your president ... and your head will be on a pike,” Schiff said.

“I hope it’s not true. But I was struck by the irony of the idea, when we’re talking about a president who would make himself a monarch, that whoever that was would use the terminology of a penalty that was imposed by a monarch, a head on a pike.”

Republicans said they were insulted.

“The whole room was visibly upset on our side of it. It’s insulting and demeaning to everyone to say that we live in fear and that the president has threatened all of us,” Republican Senator James Lankford of Oklahoma told reporters later. “Nothing like going through three days of frustration and then cap it off with an insult.”

Oh. Tough shit. I don't buy the pretend outrage. Sorry. "How dare he insinuate we are intimidated by a vengeful president?" is bullshit when we know who this guy is. As with the intimation that voting against witnesses and documents looks very much like a cover-up, and that pre-judging the acquittal of the president without any further investigation is a violation of the oath they took to be impartial jurors, these statements are meant to be insulting because being those things is bad.

They are "visibly upset" because they are hopping mad someone pointed it out. What they could do about it is visibly do their jobs. What they could do to fight that characterization is appear impartial and not fuck around. What we don't need out of them is crocodile tears and poutrage.