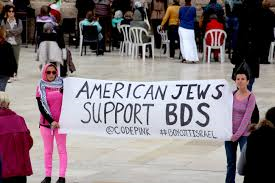 Although the Trump Administration is coloring an upcoming executive order that will redefine Judaism as a nationality rather than a religion as a means of combating anti-Semitism, I'm deeply skeptical. A nationality implies that all persons considered "Jewish" are of a particular nation--presumably Israel, but this doesn't take into account that American Jews are American, and hail from many different geographical areas. It isn't just a way of blurring out the identity of Jews as Americans, but it feels a little like a form of erasure of the diversity of the diaspora.

Also, it is a mistake to associate disagreement with the policies of a nation, Israel, in the form of its current government, with a hatred for Jewish people--these things are quite different. Americans are not a monolith, and American Jews are not a monolith; there is diversity of opinion, which includes proponents of BDS regarding the treatment of Palestinians in Israeli territory. This move appears to conflate freedom of speech against policies with hate speech against people--it limits freedom of political speech and action in a way that is shocking for an administration that found there were good people on "both sides" of a conflict where one side chanted "Jews will not replace us." (And whose greatest apologists on Fox News often cite Soros conspiracy theories.)

It also perpetuates a trope about dual allegiance by Jewish people to their home country and their larger identity as Jews. There is nothing about this that will not have unintended consequences, but the Trump Administration being what it is, I struggle to understand which parts are the fully unintended ones.  Singling out people by nationality simply has a bad historical precedent. This administration has tried a Muslim ban and centered it on certain countries, and has detained people of many countries who seek immigration or asylum under heinous conditions. I don't like the looks of this lurch towards Nuremberg.