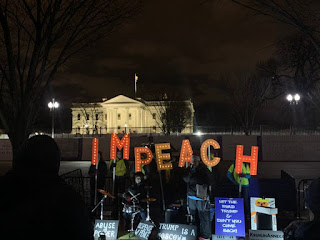 All over the country, there were protests this evening in support of impeaching the president. Numerous newspaper op-eds have been written in support of impeachment. On this night, some House representatives are considering their choice and what it means for their political future, some are considering what it means for their country's future, and, sad to say, some will go to sleep tonight mad as hell that this choice was ever laid on them, blaming liberals, or the whistleblower, or the media, that it had ever come to this, because it just doesn't occur to them that the guy to blame for Trump's impeachment is--himself.

Just asked Trump in the Oval Office if he takes any responsibilty for the fact that he’s about to be impeached. His response: “Zero.”

That certainly seems to be the way Trump himself views this impeachment process. In a six-page letter, which seems like a patchwork quilt of self-pitying and indignant Tweets, he blasted the Democrats, but his letter was full of false claims. He compared himself to the victims of the witch trials, which is just nonsense.  He wants to unload about whether he got a chance to defend himself when his pet senators McConnell and Graham have already boasted about wanting to fix up his trial, and will block possibly even more damning testimony.
Maybe Trump understands full well that there are people who have never liked him (many because of his rank and obvious misogyny), but he doesn't understand why--we watched him. We've seen his personal and business wreckage, his sloppy behavior, his rage and his vindictiveness. We see it as unfitness.  And while I totally understand that he has his supporters, they have to confront that what he has done and has been doing and will continue to do is use the office for his own ends, and our national security and reputation will suffer as a result. (So far they probably haven't really confronted it all yet. And not for the first time.)
The vote is expected to be basically down to the party line, with some defections in redder areas, but I expect Pelosi still can count and the impeachment is assured. I think it is correct, and as it is defined by the Constitution, it is proper and timely.

Bravo. Impeachment above all is an act of popular sovereignty, and people should be on the streets day after day to protest this president's abuses of the public trust. https://t.co/XyMdQUX1gK

No one is above the law.