TWGB: This Bullshit All Over Again 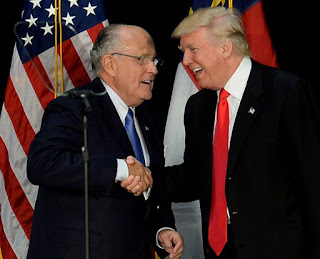 The news cycle lately has me doing TrumpWorld Grab-bags every other day, which is a dump of like, twenty-something tabs each time I wade into the saga of the terrible little White House that should not have ever happened. I grow weary.*

Anyways, Trump's cornpone Renfield, Lindsey Graham has offered the "incoherent defense that Trump's foreign policy was too incoherent to even cobble together a decent "quid pro quo".  If only "We weren't evil, we're just incompetent" was gong to suffice at this juncture! See, we already heard the "too incompetent to collude" defense regarding Russia, and I would still call that defense shaky at best. After all, the best part of collusion with Russia lay in staying still and not reporting anything to the FBI when weird people reached out and offered things. But ah, whatever. Let's concede the Trump Administration has an incoherent Ukraine policy. Let's just stipulate that the policy started to get weird when the Trump campaign backed down on aiding Ukraine against Russian aggression in the party platform for the RNC in 2016 for some damn unknown reason. And there is no good excuse, at all, for accepting a presidential candidate who has a basically incoherent approach to foreign policy.

That much, right there, would be absurd. And yet, that is something Graham is trying to sell us about the Trump experience as if it were a feature, not a bug. (Of course, Graham himself has promised that he doesn't want to read any stinking transcripts, so the mindset there is basically "bugs all the way down.")

Now, this isn't by far the stupidest defense of Trump--you have the "attempted but failed" folks, who would tell you that even if Trump wanted to get an announcement of a Biden investigation from Ukrainian president Zelenskyy, for the low, low price of military aid that was already approved and promised by the US Congress, then it totally failed because he got his aid, thanks, and the Biden investigation never came off. (As if attempted manslaughter, attempted burglary, etc., were never charges people went to trial over.)

But here's the thing: the investigation never came off because the whistleblower announcement happened before Zelenskyy could announce anything on CNN. And the aid money, after certain stimulation, was initiated. Because Trump was caught. Doing an extortion. By everyone. Because that is what you call it when someone is threatened and has to do a thing to get help. It could also be called soliciting a bribe, and because the bribe is an illegal campaign contribution (of sorts) like, how fucked is Trump?

Anyway--I digress. That announcement of an investigation into Biden never happened in Ukraine, and here in the US, although Trump allegedly pressured AG Bill Barr to declare him cleared of any wrongdoing regarding that perfect phone call--that never happened either. (Which is a shame--former FBI Director Jim Comey refused to publicly clear Trump regarding the Russia investigation, and we know how that went.) I still say Barr should recuse. (Even if that leaves Trump at war with his attorney general--just as he was with Jeff Sessions, who is now going to run for his old US Senate seat.)

It's all right, though. Trump has picked up a strong defender in Pam Bondi, former Florida AG, who will now be defending Trump against possible articles of impeachment that might include bribery. There's absolutely nothing like getting someone to defend you about a bribery charge like someone you...have....allegedly.....bribed. Because irony is good for a PR campaign. Or something.

Anyway, she can't be a worse defender for Trump than his very expensive free lawyer already is. Just recently, Rudy Giuliani made an interesting admission on Twitter regarding his efforts in Ukraine: 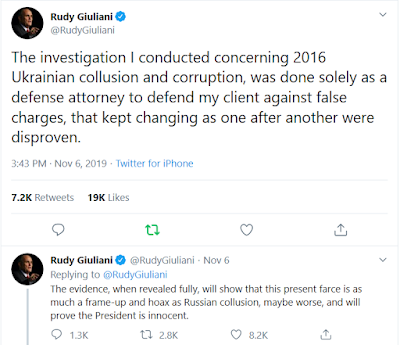 Yep. All of the former NY mayor's activity in Ukraine, despite texts from the State Department, were solely for Trump's benefit. We know. That's the problem!

But isn't that just like how Giuliani sort of kind of admitted to Trump repaying his former attorney Michael Cohen the hush money in the Stormy Daniels situation, making him an unindicted co-conspirator?  Having your defense attorney admit what you did: priceless! I again have to say, Giuliani is worth every penny Trump doesn't pay him.

Anyway, I am only about halfway into the stack of stories about the Trump saga that I could weave into this thing--but the unifying theme here is Trump and friends go through so much bullshit, they've started to repeat their bullshit. Just like, in the larger picture, Trump's asking Ukraine to dirty up Biden is an echo of his call to Russia to deliver Clinton's emails.

It's always a new morning, but with Trump, it's always the same old bullshit.

*I cut my sarcasm out because in hindsight, alas, just no. (I joked I would like to get paid in booze for blogging. It's a little too true, sometimes.)
Posted by Vixen Strangely at 6:48 AM