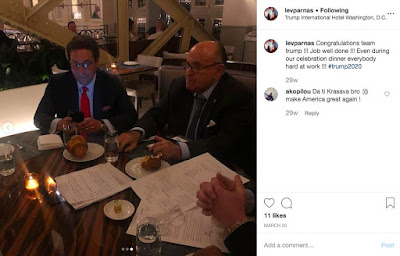 Wall Street Journal reporter Shelby Holliday has the best thread regarding Lev Parnas' Instagram account, because it destroys the idea that the recently arrested crime comedy team of Parnas and Fruman were completely unknown to Trump World. Lev Parnas actually has a long Trump history.

But Trump said he never knew these guys.  So weird!

Also, as we might have noticed earlier, former Trump attorney Dowd indicated that they were part of Trump's legal team and had attorney client privilege--how is that possible if he doesn't know them? Right?

But that's normal, Trump also doesn't know the State Department employees that are testifying against him right now. He doesn't know a lot--he gave this discursive speech of sorts today in front of people:


But we’re going to bring our soldiers back home.  So far, there hasn’t been one drop of blood shed during this whole period by an American soldier.  Nobody was killed.  Nobody cut their finger.  There’s been nothing.  And they’re leaving rather, I think, not expeditiously — rather intelligently.  Just leaving.  Leaving certain areas.  Leaving.
We’ve secured the oil.  If you remember, I didn’t want to go into Iraq.  I was a civilian, so I had no power over it.  But I always was speaking against going into Iraq.  It was not a great decision.  But I always said, “If you’re going in, keep the oil.”  Same thing here: Keep the oil.  We want to keep the oil.
And we’ll work something out with the Kurds so that they have some money, they have some cash flow.  Maybe we’ll get one of our big oil companies to go in and do it properly.  But they’ll have some cash flow, which they basically don’t have right now.  Everybody is fighting.  It’s not a big oil area, but everybody is fighting for whatever there is.  So we have a lot of good things going over there, and they’re going very well.


He secured the Kurdish oil that Assad gets with the handful of hundreds who will ultimately remain in Northern Syria? Or he secured the Saudi Arabian oil with the extra couple of thousand people he sent in?  Or both, because he sees securing oil as very important, and maintaining allies--actual human relationships, as not as important? But maybe "we'll work something out with the Kurds so that they have some money". Because that will fix their being displaced, and their slaughtered people. Money. You throw money at them, champ. See how that will fix anything. You jowly orange peel fuck.  You low-lying fungal spore-cluster; you fetid earthen vomit.

He doesn't know. He doesn't know the policy advisors who would tell him to say anything but that bullshit. He thinks they are fighting over sand and oil, and not an actual place where humans have lived, and made history, because he only found this place right now.

But if you listen to the wind blow through  him, the FOX News wind, the grievance, the stupidity--

You know him a lot. You really do. It isn't good. It isn't making America Great.

Hi Vixen, you and I do not share the same point of view about the President, but I don't think that makes you a bad person.

If I could give one piece of advice to the President. It would be as follows: