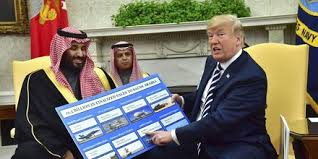 It is still a little amazing to me that Saudi Arabia, whose defense spending is pretty enormous, managed to have half their petroleum capacity imperiled by a drone strike (which was temporary damage) from either the Houthis or Iran (or on behalf of the Houthis by Iran, or the Houthis with Iran's help--whatever)--because shouldn't they have more hardened defenses around an obvious target like that, given the length of time they have been engaging on war with Yemen? (Or was reporting on this incident a little magnified?)

I don't know. I have a hard time understanding why Saudi Arabia is waging genocide in Yemen and why the US has continued being complicit with that, I only know that Trump used a veto to keep sending weapons to Saudi Arabia-- and the reaction of Donald Trump, on a day when the talk was all about whether he tried to extort a foreign leader into investigating a potential political rival, was to announce that the US was now going to send US military personnel.

Because the oil was hurt, you guys. Thoughts and prayers for the oil.

I'm just saying that the timing is interesting, is all. I'm not suggesting that this president would try to transform the news cycle from a scandal about some violation of campaign finance and abuse of power and the high crime of bribery (which would not be new, in this presidency, am I right?) by trying on the gravitas of being a "war president", because that isn't what Trump is doing, exactly.  I will suggest that Trump is pulled by his need to appeal to his base, which means appearing strong, even if that means strong and wrong, just as much as it means changing the subject. And then there is his unique take on US military power as a protection racket.  Trump has long seen it a waste of US resources that the American military is world cop--and would prefer to see it be more profitably used as "hired muscle"--by preferred customers willing to pay cash.

I think this Iran/Saudi Arabia thing was in play whether or not the whistleblower story became news or not, but the timing of the deployment isn't lost on me. This also scuttles the possibility of Iran nuclear talks, verifying as certain the knowledge that we'd be better off if Trump just stayed with the damn Obama deal. And Trump has demonstrated he can't help but plunge us deeper into every level of the suck--whether in Afghanistan, or anywhere else.

I don't like it. Trump is a man of few tricks (misdirection and frauds--like birtherism and his voter fraud claims), but the press sometimes gives him belly rubs for them. Like a dog! So weird for a man who uses "Like a dog!" in the way he does.

(No insult intended to actual dogs, who deserve better.)

Posted by Vixen Strangely at 12:44 AM