Petty Tyrants and Their Enablers 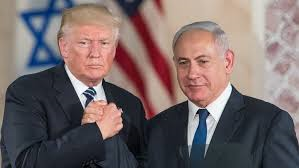 Despite previous statements from Israeli Ambassador to the US Ron Dermer to the effect that Reps. Rashida Tlaib and Ilhan Omar would be permitted to visit Israel, and WH Spokesperson Stephanie Grisham to the effect that it was "fake news" to suppose that President Trump would pressure Israel not to allow their entry, today Prime Minister Netanyahu effectively banned the entry of the US's only two Muslim congresswomen to that nation.

The record (Twitter) will show that Trump definitely did exert just a little pressure:

It would show great weakness if Israel allowed Rep. Omar and Rep.Tlaib to visit. They hate Israel & all Jewish people, & there is nothing that can be said or done to change their minds. Minnesota and Michigan will have a hard time putting them back in office. They are a disgrace!
— Donald J. Trump (@realDonaldTrump) August 15, 2019

and one has to ask--if there had been no change in what Reps. Omar and Tlaib stood for last month, or even additional information revealed about them during that time, what in the world changed? Is the weakness that Israel (Netanyahu) would have allowed these US Reps in, or is it rather that, instead of doing so, and possibly correcting any incorrect ideas they may have had or trying to promote a dialogue, he knuckled to the petulant social media demand of the US president because he might be facing a difficult election? (It certainly could be interpreted the latter way).

Of course, Trump's intention, as it has always been, was to demonize the two congresswomen as anti-Semitic because  he's regularly called racist (as I think he should be) and slamming Muslim congresswomen is very much his shit (because he's terrible) and now Netanyahu's spokepeople have to also demonize the two a bit to justify his decision, even though even worse people have totally been let into the country.

That's the thing about enabling petty tyrants--it sometimes does carry a benefit (like Netanyahu appeasing Trump and satisfying hardliners) but you also end up continuing doing their bidding for a loooonnng time. Sometimes people even catch on that you're doing it, And that? Can be some of the weakest shit of all.

Posted by Vixen Strangely at 8:38 PM