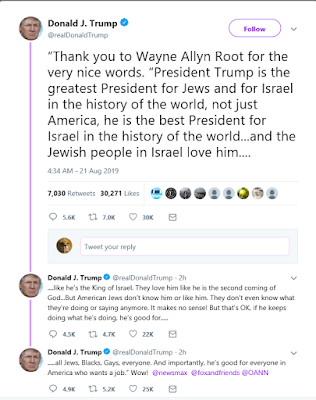 You know, after being called Queen Esther and King Cyrus and signing Bibles like he wrote the damn thing, why not? Be King of the Jews and Protector of Greenland. Whatever.

Here's the clip. Speaking about his trade war with China, Trump looks to the heavens and says, "I am the Chosen One." pic.twitter.com/mKWA9g7wzQ


Oooohhhh. Ok, then.
Posted by Vixen Strangely at 9:33 AM

Y'mean, he's the Lubovitcher Rabbi? I always suspected as much.