Is Stable Genius Joking, Though?

Pres. Trump jokes about windmills in speech on energy: "All of a sudden it stops, the wind and the televisions go off, and your wives and husbands say, 'Darling, I want to watch Donald Trump on television tonight, but the wind stopped blowing." https://t.co/JsAo4rT8TM pic.twitter.com/H3ERYkZ5CR
— ABC News (@ABC) August 13, 2019

In a relentlessly false speech, like many of Trump's other, relentlessly false speeches, Trump repeated a laugh line about the power going out if the wind stops, but honestly? Why do we give him the benefit of the doubt on this one? I can easily see him rejecting buying an electric car because he'd never find a cord long enough for where he wants to go.

His thing about windmills--I still say it is nearly quixotic.

Anyway, Trump also reminded us about how much he loves trucks, and okay--we know, kiddo. We know. 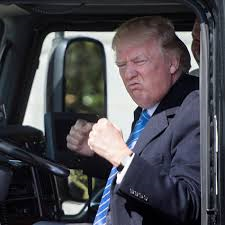 Posted by Vixen Strangely at 8:25 AM