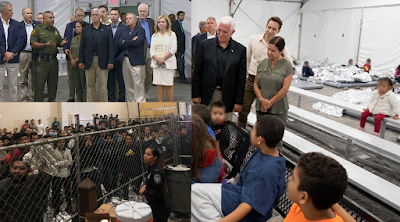 Regarding his visit of the Donna and McAllen detention centers, Mike Pence said he wasn't surprised at what he saw, that he thought CBP was doing a great job, that the conditions were excellent except for what could be blamed on Democrats and that the crisis was Democrats' fault--in other words, Pence and his group saw what they were prepared to see, and did not see what they were not going to see.

Pence's responses to the trip have cause some to call him a "fake Christian" and I'm not really interested in questioning Pence's religion based on what he's said anymore than I'm sure Pence is thinking about it right now. I've long been of the opinion that people who go out of their way to remind you about their spirituality do so because their behavior would never remind you of it otherwise.

He took to Twitter (!) to call CNN liars about their coverage--but does the footage lie? Or is it just different than what he wanted to focus on? And while Pence may have been told that treatment was good when he visited, that accounts for one facility, when, sadly, this can not be said for all facilities.

Not all of the problems have to do with funding, and funding without ensuring actual better conditions seems inadequate, but it's interesting that he focuses on that. There are also questions about who is detained in these facilities, and for how long, and the fallout from harmful policies that still resonate.  There are also questions about how agencies are run, staffed and lead,  and how stressful conditions create extremely poor morale that shows itself in different ways. Those are questions that Pence might want to take up with his president if he were truly concerned about what he saw.

Not that he would see any progress by doing so. But it would be as useful as his photo-op was. See?

Posted by Vixen Strangely at 2:39 AM

I would not be surprised if Pence saw a "cleaned up" facility which had been prepared for him to observe and the inmates coached on what to say. The Nazi's did the same thing at their death camps when the Red Cross came to inspect the concentration camps in WWII.