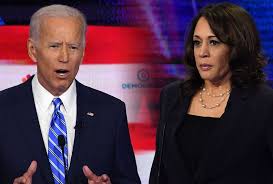 This is the kind of thing that grates on me:

Former Vice President Joe Biden defended his record and his recent debate performance in a CNN interview Friday, saying he wasn’t prepared for the way Sen. Kamala Harris, D-Calif., attacked him in the Democratic debate.
“I was prepared for them to come after me,” Biden said in a one-on-one interview with CNN's Chris Cuomo. “But I wasn’t prepared for the person coming after me the way she came after me. She knew Beau, she knows me,” the former vice president said, referring to his deceased son, Beau Biden, who worked as a state attorney general like Harris.

This was a debate for the Democratic primary. If he was prepared for "them" to come after him (as he should have been) he should have been prepared for Senator Harris to be one of them--it's a competition, not a church social. Saying he was prepared for the issue to be addressed but not for her to come at him--or just not in that way, seems like he wants to characterize her bringing it up as being unfair or uncool, and it rankles me. On that stage, she is his competition, and her personal experience made her the most likely person to bring it up, and his response being conveyed in terms of hurt surprise strikes me as either disingenuous (how joyless of her) or as something to view as a warning sign--he actually wasn't prepared.

This is something I'm worried about with his candidacy--it hinges in a sense of stability and normalcy that comes from nostalgia and name-recognition but this fight needs urgency and newness. When I hear him make claims that Russia wouldn't meddle on his watch I wonder who was Vice-President in 2016 when the US election was meddled with. When he claims he would nominate Merrick Garland for SCOTUS again (who would be nearly 70) I feel like Biden's head isn't in the game.

Harris made a very promising statement regarding how she views the 2020 election: "And we can't afford to be lovely, and then lose." Maybe there is a weird double-standard that has been in effect where some people are supposed to play nice (women in politics, people of color, Democrats, I don't know) but I don't expect Trump to play nice, I don't expect Republicans to play nice, and I don't think the media plays nice. So I want someone prepared to go hard.

Anyone looking to do less can go home.


Posted by Vixen Strangely at 9:34 AM