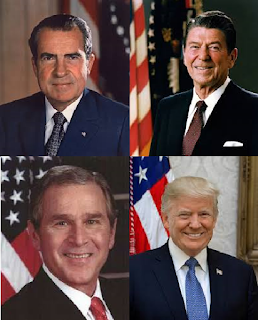 I was skeptical about the value of John Dean's testimony comparing President Trump's actions in office with Watergate, and still am. It's not that I think the comparison is wrong--I don't! It's just that even after Nixon resigned (and was pardoned) we still got Republican presidents even though the madness of the criminality proposed or actually engaged in by Nixon and associates is actually mind-blowing when actually contemplated.

So we got Reagan and-Iran Contra (and I never could swear the October Surprise conspiracy wasn't a real thing, either). When George H.W. Bush got into office, he pardoned the handful of Reagan officials that had been convicted, and it seems pretty unlikely that Bush was as "out of the loop" regarding that affair as he claimed.

George W. Bush's presidency should have been the final straw. The pre-9/11 intelligence. The Iraq War. Guantanamo. Abu Ghraib.

But how did Republicans treat Presidents Clinton and Obama? (Do I need to go into how Whitewater and Benghazi weren't about fact-finding but fault-finding?)

And now, you can't even get Republicans to read the damn Mueller Report (which, it was once crowed in front of tv cameras, exonerated Trump--until it didn't).

The double-standard view holds up even to this day, though. While I, or liberals in general, or even objective folks of goodwill, might Dean's comparison seriously based on the details we know of Watergate and the detail in the Mueller Report, and think, for example, a line of questioning intending to diminish his testimony based on an ad hom argument was poor, Rep. Matt Gaetz's description of Dean as having made a "cottage industry" of criticizing presidents will stick simply because he pointed out that Iran-Contra and, well, shit, half of what the Bush Administration did was worse than Watergate. There might be truth in it--but not to Republicans if they've never admitted it to themselves.

And after all, didn't Dean make money...on his books?

Look, Dean made a perfectly good swipe at Gaetz for possibly not understanding the rule of law issues involved because "Watergate was before his time". But I was still in diapers at the time, and I get it. The problem isn't when Gaetz was born, it's actually assuming you can treat Republicans like they weren't born yesterday. The environment of unaccountability they've created has served them well, and they aren't going to be shamed by something that happened 46 years ago, or 35 years ago, or thirteen years ago. Or a minute ago--unless you rub their noses in current events.

Where some might see the throughline from then until now, Trump loyalist conservatives will only see water under the bridge, because there is none so blind as those who don't want to see. Everyone is either dead and gone or alive and pardoned and reborn on cable news. It's a little harder, though, to get away from what's happening right now.  And now is what and when Democrats need to focus on.

Posted by Vixen Strangely at 6:45 AM

No one cares about John Dean (outside of his friends and family) unless he's talking about Watergate.

But we do need to dive into these things while they're happening. With Iraq in 2003, it was too big of an emergency to look into well ahead of time, too critical to military lives to examine while it was going on, and I was told later on "What's the use? We did it. We're there."

We don't go back and punish our Kissingers later for the crimes they commit as "public servants." OK, Trump wants to. Not Kissinger but, you know...

The Bush team got away with it. Maybe they shouldn't.