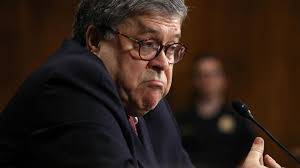 As of Tuesday evening, events were shaping up for a pleasant enough TrumpWorld Grab-bag post focusing on mere possible (okay, probable) corruption based on the lawsuit the Trump family filed against Deutsche Bank and Capital One to block them from responding to a congressional subpoena. A pleasant review of the obvious red line Trump seems to draw regarding his financial affairs (such as his ongoing refusal to let anyone see his taxes) would be an interesting enough post--but then there was even more interesting news:


Special Counsel Robert Mueller sent a letter to AG Barr on March 27, concerned that Barr's 4-page memo regarding the report “did not fully capture the context, nature, and substance” of the investigation.

Well, no kidding. Members of Mueller's team on background said as much to reporters, and even in the redacted report that we could see that Trump was not exonerated. The revelation that Barr was told by Mueller that he was wrongfooting everything and misleading the public served as a counter, to my mind, to the riposte of Mueller report skeptics that if Barr was lying about the content, why hadn't Mueller said anything. He did--to Barr, as was professionally apt. And it seemed like Barr mislead congress about having received word of any concerns--he apparently did, even if he seems to want to present himself as not understanding the point Mueller was trying to make.

So I decided to sleep on it and wait for the Senate hearing to find out what Barr had to say for himself.

He addressed the letter as being "snitty", with further statements  that make one ponder, like his comment that if Mueller was not going to make a determination himself on the question of obstruction, he should "pull up", which really sounds to me like he might have told Mueller to end the investigation (even though Mueller's reasoning was in the report, based on the OLC memo on leaving the matter to Congress). He also referred to the report as becoming his "baby" when Mueller handing it over to him, as if implying that whatever Mueller's intentions were, he was taking charge.

Yet, there was a really freaky thing going on with his overall answers. It's one thing if Senator Lindsey Graham maintains he hasn't read the entire report, even if it's all of 400 and some pages which in my estimation is practically a beach read. Graham has become Trump's fool and perhaps has decided that ignorance, like discretion, is the better part of valor. But Barr also seems pretty unclear about what was in it, and hey, wouldn't knowing be sort of exactly his job? Like, he didn't know about polling information Manafort passed along to Kilimnik. He didn't realize that Trump had a defensive briefing regarding Russian meddling during the campaign, and had to correct himself. He seemed foggy about how the investigation actually began (George Papadopoulos blabbing to Alexander Downer). And he lied about things like whether he approved of what former FBI Director Comey had done in October 2016 (when, hello, he wrote an op-ed about it), and seemed to need to be hand-held through whether Trump asking White House Counsel Don McGahn to get rid of Mueller and then lie about it was maybe subornation of perjury and kind of bad.

He had, in other words, the knowledge of a person who got his information from Fox News, I guess? He basically seemed like he didn't care what was in the report because his object mission was to kill the "baby" anyway, right? And he basically admitted he didn't even check out Mueller's evidence--pshh, he didn't read the report, so how could he even check the facts, let's face it.

Which really calls into question his ability to do his entire job, since he's clearly either incompetent or shady, and my money has been on shady this whole time. For one thing, if he thinks he's working for Trump and not the American people, shouldn't he recuse from the spin-off investigations that Mueller referred out?  For another, if his loyalty is to the president (or the party for which he stands) and not the law, shouldn't he just freaking resign?

But just to complicate things, Barr's kid and a son-in-law also got some federal jobs, and if that isn't something shady?

Barr seems a little less than a person of "unimpeachable" character right now.  In the meanwhile, Barr is sort of "calling in sick" regarding the House Judiciary hearing he was going to have Thursday, and may need to be subpoenaed. And to my mind, that isn't all he needs....