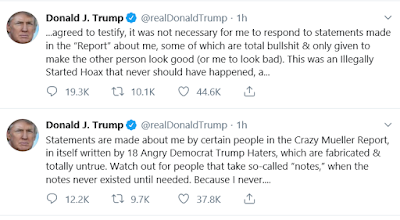 The above Tweets read: " (1)Statements are made about me by certain people in the Crazy Mueller Report, in itself written by 18 Angry Democrat Trump Haters, which are fabricated & totally untrue. Watch out for people that take so-called "notes", when the notes never existed until needed. Because I never....(2) ….agreed to testify, it was not necessary for me to respond to statements made in the "Report" about me, some of which are total bullshit & only given to make the other person look good (or me to look bad). This was an Illegally Started Hoax that never should have happened, a..."

And there the two Tweets have not, for well over an hour now, materialized into the third Tweet that would have (perhaps) completed his thought. It's quite a bit of belly-aching for someone who crowed over a summary of a summary given by his AG William Barr that made him feel "totally exonerated".

Of course, there's a really good reason for this--the report deviates from both Barr's four page letter and his press conference. Barr took parts of the Mueller report out of context to create a false narrative. Rather than the Mueller Report as existing as a document to allow Barr to make the final word on Trump's culpability for 10 (count'em--10!) instances of potential obstruction of justice, the full (albeit redacted) report reads like an impeachment referral.

This belies Trump's assertion that he was being railroaded by an often-changing number of "Angry Democrats"--they didn't charge him, but left it to congress. As to the idea of an "Illegally Started Hoax", the "hoax" has, at it's center, a counterintelligence investigation into Russian interference with the 2016 elections which did support Trump's campaign. Full stop. It wasn't a "both sides" thing to sow chaos (I can't think of a single thing done before November 2016 ostensibly done by Russian interference that would have helped Clinton's campaign at all), and investigating the interference wasn't thrown out there a a political matter to undermine Trump's legitimacy (he does that all by himself). It was to protect future elections and our way of government.

Trump brought the obstruction of justice investigation on himself by routinely denying that the Russian interference ever took place, by inserting himself into the investigation of Michael Flynn and firing Comey. If Trump did consent to an interview (not even to "testify") he might have been able to illuminate what his intent was to make the likelihood of whether his actions were obstruction or not more clear. (Or he would have lied his ass off, which is why people do take notes to see if any story he gives one day will be needed, as when asking then-White House Counsel Don McGahn to do "crazy shit" and then turning around and asking to say it never happened.)

And now Trump is mad. Fine. But he's mad because he knows he's not really exonerated, because if he really, really was, he'd be so happy, happy, happy. And I hope his prophecy about himself turns out still to be true:

"Oh my God. This is terrible. This is the end of my Presidency. I'm fucked," Trump said.

It's not just up to congress (I feel that they should pursue this, myself). It's also up to us to keep the story straight--Barr misrepresented everything.
Posted by Vixen Strangely at 10:16 AM

Vixen, American politics is starting to defy parody. There was once a fictional character named Chicken Little who insisted that the sky was falling.