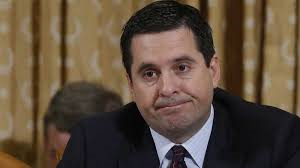 Amazing, isn't it, how some characters fall out of the TrumpWorld plot for a little bit, who at one time seemed so integral. I can't actually say that Nunes was missed, but for crying out loud, who doesn't like a little bit of comic relief with your national tragedy? So I am somewhat cheered to present a story that has Rep. Nunes suing an internet cow, Liz Mair (no, she's not an internet cow, she seems okay), Twitter, Inc., and a parody account of Devin Nunes' mama, because she served as his campaign treasurer, which is a whole other thing. 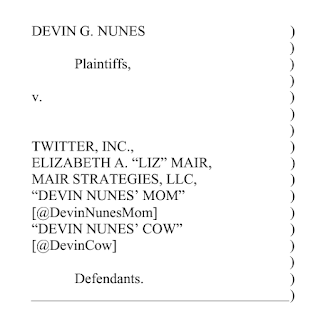 That seems pretty bizarre, but his side of the story is pretty compelling--people are mean to him on the internet, and he isn't getting nearly the likes and retweets he ought to, and some of the stuff said about him are lies!! And...

And this is a grown man who went into politics on purpose. Every politician takes hits on Twitter, just like they do on talk radio, cable news, blogs and other assorted websites. Does he think people genuinely didn't think the Devin Nunes' Mom and Devin Nunes' Cow Twitter accounts were satire?

NUNES (looks up from keyboard, eyes damp with tears): Mother, how could you?

DIANE (peering over his shoulder): We've talked about this, Devin. Not everything you see on the internet is real.

NUNES: But what about...this? (pointing fiercely at the screen)

DIANE: Oh for heaven's sakes, how would she even work a keyboard?

(Disclaimer: I'm not saying this happened. I'm being satirical.)

Anyhow, if this goes on, I'm clearly on the side of the cow.

UPDATE: This is already working out very well for Nunes on social media.

UPDATE, ALSO, TOO: This looks like the type of lawsuit a lawyer might take on if it certainly could not make their reputation any worse, and is probably mostly intended to be a Very Expensive Annoyance (probably donor-funded) to discourage people from saying Mean Things About Dev.

It's dumb but also very vindictive.
Posted by Vixen Strangely at 11:31 PM