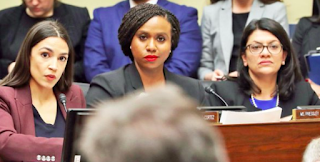 There's something to be said for Michael Cohen: he isn't a wholly laundered character and might still be holding some stories to himself, but he's looking to get clean. This might stem from his being so terribly, totally caught by having been raided and having few secrets left, but as we've seen with Paul Manafort, being raided and having your secrets ransacked doesn't always result in total honesty. But I note with some amusement that the recurring theme in the narrative the GOP House questioners had for Cohen had more to do with undermining the possibility that Cohen ever could be credible than with trying to wring anything like truth from him. They basically undermined what could have been their side of the story by not offering a counter-narrative, only demeaning the witness for being there without trying to find exculpatory facts that might make Trump seem less like exactly the guy who would have a loyal liar like Cohen on his payroll.

Their insistence on criticizing Cohen as a liar only reminded us of the situation that enabled and encouraged falsity. I think this was a bad choice.  They should have tried harder to make Cohen self-own, but they aren't really interested in fact-finding here--which sort of shows by the failure to seem prepared or fact-knowledgeable.

The GOP tone was set in advance by FL Rep. Matt Gaetz, who made a Tweet that was threatening in tone to the witness: 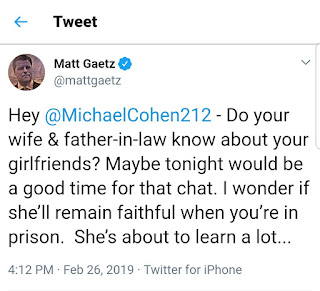 This threat has since been presented to the Florida bar. But it is totally in line with what Trump has tweeted about Cohen's family as their relationship fell apart. It is exactly his (Trump's) modus operandi.  He hints at horrible things, and lets the thought do its work.

But let's talk about Gym (I mean Jim, of course I do) Jordan, who worked to keep pressure on Cohen and his lying. He presented an opening made of RW brain worms.  Tom Steyer this and Glen Simpson that. Chris Steele. And them. Let's just accept that Michael Cohen was a first hand witness to what he's even talking about and try to follow shirtsleeves Gymbo sweatily down his Breitbart rathole. (Or don't--it isn't worth it because it's dumb.)

Is Lanny Davis working for Cohen pro bono--ahem is Rudy Giuliani working for Trump pro bono, and was Paul Manafort working for Trump without pay during the campaign? People do things for reasons that are not capital compensation (or are off-books). Trump should not want that line of questioning into the doings of all his associates, I would guess.

Some of the Republican questioners were astonishingly amusing. Louisiana Representative Clay Higgins put on his best non-fitting vest and "jes' a country lawyer" drawl to say he didn't know who Michael Cohen was but he surely did wonder why Cohen didn't turn over the boxes of stuff he looked through to be investigated when it was already stuff that was confiscated from him and then returned in the first place, meaning it was already good and sorted through, thanks so very.

And you know Paul Gosar was a kind of asshole, as even his own family would have told you, with some "Liar Liar, Pants on fire" aphorism. How entirely dumb. Trump employed this liar Cohen for how many years to lie on his behalf?  Trump being a notorious liar per so many news outlets? Is Trump even a truthful person?

But I want to give appropriate props to the midterm elections that gave Rep. Elijah Cummings this gavel, and let freshman representatives like Ayanna Pressley, Alexandria Ocasio-Cortez, Katie Hill and Rashida Tlaib, who all made points not just for this situation, but the entire historical record, and let them have their historic "say". They opened the door to further subpoenas, and established how Trump's defense was racist in its attempt to defend his racism. They just came up, but they came up fighting. And I love them for it. They are doing this thing, and doing it well. Better than some people who have been in the House more than a minute and are poorly fronting for Trump.

But best of all, AOC put on record they need to talk to Allen Weiselberg, who is not apparently cooperating despite what we were told about an immunity agreement. And some squid called Michael Calimari. And we needed to see Trump's tax returns. And maybe Trump was guilty of insurance fraud.

They put the worst parts of Trumpism on record. They might have went a little far, but for reasons. But their reasons make all the difference. And so does coming clean about what Trump actually does and is. Can we pretend the sides are the same, seeing how Republicans will defend anything Trump is alleged to have done and Democrats intend to do their damn jobs?

No one could think anything of the sort now.