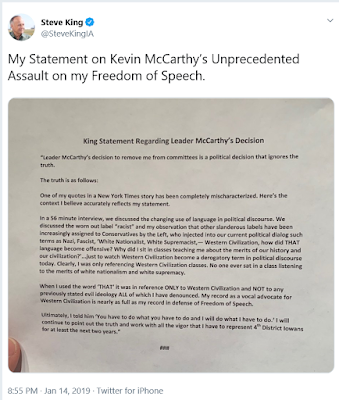 If there is anything so sad as a phone-picture of a printed out self-defense for one's racism resulting in the loss of committee seats, referring to that as an assault on "Freedom of Speech", and including a thumb, I guess it would have to be something especially self-congratulatory and insufficient as, maybe, a president hosting championship award-winning athletes at the White House during a government shut down with some room temperature fast food served on good silver and china, but without benefit of even chafing dishes and sterno. Which would be especially sad if that same president was connected to a local hotel with a kitchen that could possibly have catered even a basic business convention chicken dinner with more class. It would have to be something as pitiably late and un-self aware as an until just-now anti-LGBT, pro-Assad and pro-torture candidate thinking an apology will make her a viable Democratic presidential candidate. It would have to be...

But wait. What we have is long-time embarrassing racist Steve King, recently re-elected to his congressional seat in Iowa's 4th District, finally getting told he's a little too much. Huh! Because he said that he didn't understand when phrases like "white supremacist" became dirty words. I've talked about his racism on this blog a few times, because it affects a lot of what he says and does.  It could be a good sign that he is being censured after a fashion just now, but he was supported right through his re-election being the same exact racist guy! Prior to just now, he was supporting Faith Goldy, who is pretty openly white supremacist, and reiterated the Soros tropes that were part of the toilet-seat culture that influences the Squirrel Hill shooter. Prior to his election, he lost corporate support from several companies--but just now the GOP wants to distance themselves from King's rhetoric? What about that support Joni Ernst and Ted Cruz and Chuck Grassley gave him?

Well, what about the support that the GOP still gives to Donald Trump? Because if they don't especially love what Rep. King has been saying, the funny old thing is, Trump says quite a lot of the same. King's rant about somebody else's babies being unfit to carry forward western civilization is aligned to a recent tweet from Trump of a Pat Buchanan column that suggests that immigration will cause the United States to cease to exist. Buchanan is an old man, and I still am furious about the time I heard him speak about a "culture war" at the RNC and knew he was talking about a war on me. When Trump Tweeted that (well, someone tweeted, because I don't think Trump has this reference) that Buchanan should not go gentle into that good night, I almost thought for an instant the sumbitch might be dead. But my hopes all around account for little.  Buchanan and his ideas live. Trump and his administration can be considered pretty much pro VDARE, and still pro Steve King, and when Steve King describes the label he has as racist as "worn out" he is quite wrong, because the label of "racist" will not actually be worn out until folks like him have faded away. And even still it will remain necessary as a warning.

If I were still in any sense an optimist, I might want to believe that what happened was a reckoning for the GOP, and that Rep. Kevin McCarthy is a braver and more honest man than Paul Ryan had been (not a hard feat) and has drawn a line in the sand that needed to be made.

But if I don't believe that, it is because folks like Senator Ted Cruz can't quite disavow King, and maybe might support him again in the future, should the occasion that they need his support in Iowa (1st state in the presidential primaries) arise. And they certainly have shown no inclination to disavow President Trump at all, whatever hand-wringing over his Tweets and his cruder language might go on.

And as for King, he nonetheless won his election, and for now, is still representative of some portion of the state of Iowa, intentionally, on purpose. Will the majority of his district, less than two years from now, realize what he is and decide they don't care for it? Will his primary opponent be a less bigoted, but still conservative, better option?

I can't say I know the answers to these things, but I think they matter very much. It has to matter that words like "Nazi" and "fascist" and "white supremacist" have meanings, and those meanings impact how human beings are treated--not the people called those things, when called them correctly, but the people who are harmed by those ideologies and whose rights necessitate we call bad things by their proper names.

Posted by Vixen Strangely at 1:06 AM