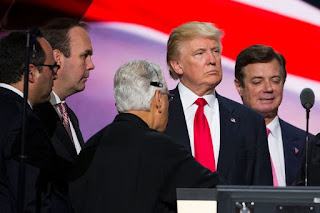 As you may know, I am not today or any day a Trump fan, and I owe a lot of this to having been from the cradle acutely aware of politics. I basically greeted my kindergarten mates "Greetings comrade." I diagnosed my elementary school's promotion of certain people into the "gifted program" and others into the "remedial" program along racial lines as distinctly problematic while I was attending, which did nothing for my own self assessment (I understood my privileges) and launched a baby dialectics. I was the subject of a schoolyard opinion that I was weird, but I understood my set-apartness as being of my own making, and that made all the difference. My thrift store clothes and BBC vocab became my brand. I cared not for following a multitude to do evil (a Biblicism that eventually undid any interest I ever had to be a part of organized faith).

Needless to say, I am not new to politics. I consider my premature birth in September 1972 as "coming out early for McGovern". I am, in full, the SJW for life. It is no slur to me--why wouldn't I rather be a social justice warrior, like my suffragette and civil rights heroes, than an anti-social injustice do nothing, which is the natural polar opposite, I would presume: the basement-dwelling unfuckable  racism-curious b/tard who thinks Trump politics are a good laugh because his incompetence somehow "owns libs".

How different we are! Because looking over the landscape of the Trumpist Morlocks, I am aware I would not really want to own, rent, or lease them , and could not be paid to haul them for rubbish. Which is why I am not sorry to see Paul Manafort get dinged for trying it with Bob Mueller, and reveal that he had no business trying it, among a bevy of trying-hards.

This bish was in a plea agreement with Robert Mueller, staring down the entirety of his not even young life in prison, and was visited with an option: Just tell all the truth, and maybe you will feel sun on your face in your vast old age. And then he felt safe enough to lie.

The reason why that makes the most sense to me is that old joint defense thingy he still had with Trump. which let Trump sort of know what he thought Mueller knew. And Manafort sort of thought being loyal enough to be a backchannel regarding what he could reconnoiter from his Mueller grilling would maybe earn him a pardon, eventually? Even if he'd still be in a sort of prison regarding shit he knew about Russian Mafiosi that would probably earn him a shafting. But anyways, he thought the lying to Mueller about Trump stuff was just pro forma for staying made. But because he's truly busted, that makes no sense. Mueller can go to the court and just provide all the deets about what he is lying about. As in, Manafort stays having giving up Trump as his really best thing.  Because this ham-faced git is not probably going to pardon him, because it would definitely be another obstruction of justice charge, and he would like to not be in prison his whole senility.

Anyways, there still is some drama about Corsi and Stone, because of course there is. Corsi, of course, is the guy who was behind swiftboating and birtherism, and chimed in first about whether former SOS Clinton sort of looked a little ill. He's scum. And Stone is a known rat fucker, which takes a very tiny...conscience (why wouldn't the answer be "conscience"?)

Not being new to politics, I wish so many of these people at the minimum: injuries. Maybe prison. Gladly, the ability to not influence politics again.

Posted by Vixen Strangely at 1:46 AM