This TrumpWorld Grab-Bag is a Dumpster Fire 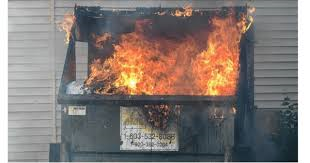 In what surely feels like a sign of the times, Merriam-Webster has added the term "dumpster fire" to the dictionary, and that is exactly what TrumpWorld feels like: to wit, "an utterly calamitous or mismanaged situation or occurrence". Except TrumpWorld isn't any singular calamitous or mismanaged occurrence--it is entire mixed lots of rubbish burning together with different layers of grease or spent rubber or whatever have you undergoing their own unique kinds of combustion according to their chemistry.

One might think this has something to do with the man in charge. I don't know if Trump himself is deep, but his superficiality seems to have layers. He is keen to tell people that his White House isn't in chaos, but admits he likes conflict. He talks about the great energy he's surrounded with, but the White House itself could be powered with electricity generated by staff evacuating through a revolving door. Trump no sooner made the statement that people wanted to work at the White House than it was announced that his top economic adviser, Gary Cohn, was leaving over a disagreement on trade policy.  (It apparently makes no difference that Trump plans to enact the tariff scheme in "a loving way".  "I'm going to tariff you so good. Tariff a piece of that ass." Etc.)

But who's to say Trump even is in charge? In an essential read on Christopher Steele and the Trump/Russia connection by Jane Mayer, it's asserted that Putin vetoed Mitt Romney for Secretary of State in favor of Friend of Russia Rex Tillerson. (I myself mostly assumed that Trump let on that the spot was available to Mitt just for the sheer joy of seeing a man grovel.)

It's not fully implausible--it seems like former National Security Adviser Mike Flynn was working out "foreign policy" (or bribery and kidnapping) on his own ambit during his short term under foreign influence, and it's quite possible that White House Senior Adviser Jared Kushner backed a blockade against Qatar in retaliation for a failure to invest in his family's business.  The operations of this White House are such that one would be suspicious if anyone did anything without some appearance of ulterior motives.


Of course, Flynn's legal woes have forced him to put the "For Sale" sign on his house in Virginia. An unsympathetic person might remark that the sadder thing was hanging a "for Sale" sign on himself in the first place.

And Jared Kushner is definitely a key person in Robert Mueller's investigation of all kinds of "influence".  (How nakedly quid pro quo does Kushner's corruption appear? Literally getting SEC charges dropped for extending a loan to Kushner's family business--it's kind of obvi.)

The likelihood that Trump's unique attitude towards corruption affects everything around him is kind of apparent. Take the news that KellyAnne Conway violated the Hatch Act in advocating for Roy Moore and against Doug Jones in the Alabama special election for US Senate. The White House position on this seems to be that while Conway violated the letter of the law, she actually upheld the spirit of the Trump Administration. That kind of devil-may-care approach to ethics easily was part of the campaign that delivered Trump into office--and, say, campaign finance violations like taking money from foreign sources or in-kind contributions from foreign sources could really be a part of that(as well as quite interesting to special counsel Robert Mueller).

Or, for that matter, an in-kind contribution in the form of a bribe in return for silence by one's personal attorney to a porn star with which one has had an affair and sort of never reimbursed the attorney for or signed the agreement to who is now suing the POTUS about it.  (The fear is real that picture of the POTPOTUS-Penis of the President of the United States--may come to light and we shall all know of it and need to deal with it, politically and psychologically, as a nation.) That attorney, Michael Cohen, is on Mueller's hook for a little bit a lot.

And what the hell--maybe this escort in a Bangkok prison will lead to the damn pee tape, because the funny old thing about the Steele Dossier is that it is holding up.

You know what might not be holding up, though--folks getting subpoenas. Lots of people are getting them, now. Just the other day, former Trump associate Sam Nunberg went on a batshit tear across cable news (but he's much better, now).  He said all kinds of fascinating things that I do not think I will take any stock in at all because it was a tour de force performance of sheer WTFuckery and possible rodent molestation that likely was intended to seed some rambling disinfo. This might not be how normal people behave--but these people are not normal. Nunberg is a Roger Stone protégé, and that dude is like four or five Batman villains rolled up in the same coat.

Now, I know this particular TrumpWorld Grab-Bag might be missing a few stories from the last 72 hours, and maybe it's a little "all over the place"--but is it also "a Dumpster fire"?  Meh--look at what I'm trying to cover!
Posted by Vixen Strangely at 2:23 AM