Everyone Needs to Learn "No" 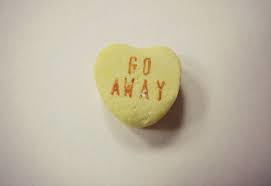 I don't know if this is a common happenstance with youth Valentine's Day dances, but a recent story that has been making the rounds has me seeing red--and not the nice, Valentine's Day heart sort of red, either. It's this story where an elementary school dance for eleven and twelve year olds has a particular instruction for girls: "Be polite, and don't say no to boys who ask you to dance."

I, predictably, think this is a terrible idea. Kids at this age are kind of weird, right? They aren't adults by a long stretch, but are aware of what romance is. Some may be ready to participate in this "adult" exercise. But kids this age generally do self-segregate by gender, somewhat. It is awkward to arrange a dance and have boys hanging on one side and girls hanging on the other without a lot of interaction--but these are kids. Maybe some kids will dance, and that's great. But telling specifically girls that they have to say "yes" to boys is on a different level of awkward.

Girls should not be told that it is nicer to do things they don't want to do because...boys. It might be nicer to study hard if you don't want to because learning is cool and helps you in life, and it might be nicer to learn the value of work and earning money for yourself. It might be nice to learn to pay for things, to cook for yourself, to value the convenience of a neat workspace or appreciate what it feels like to complete a task where you've worked with your hands--but little girls and women don't exist to make boys or men feel good about themselves, and it is more than mere politeness to ask them to just say yes to any old boy who asks them to dance.

I have a personal reason I think this is important--I developed really early, and for me at that age, I was interesting to the opposite sex, and not in a kind way. Almost as a curiosity. The compulsion for a young girl to be kind to a boy by consenting to dance despite her inclination not to, is teaching her to override what might be a very real and keen instinct to avoid being pawed at or made a spectacle of in a public place by someone whose maturity isn't what it should be. A girl needs this instinct and it shouldn't be turned aside.

It doesn't teach a great lesson for later on, either. It tells girls they are expected to "keep sweet" in other areas of their lives, because boys and men expect that behavior of them. It is the behavior expected of child brides, submissive spouses, put-upon subordinate employees, and women who just all-around expect less and say "yes" when they want to say "no". That's infuriating by itself, but what does it also tell boys and men? That women should say "yes", or they are being rude, stand-offish, bitchy or insulting? The attitude that women owe men a "yes" has had fatal consequences.

I guess this is a pretty heteronormative take in general, and among the other reasons I see problems with Valentine's Day Dances and the like in general is that they seem to be part of an imposition of a very specific type of romantic behavior that just might not be any kind of fit for the young people it's being taught to. Some traditions of school-age Valentine-related nonsense involve counting Valentines and making less-popular kids feel like trash if they haven't got as many. It's nonsense to place so much value among developing tweens on their "likeability" when it would be so much better to encourage their independence, creativity, and ability to make decisions like when to say "yes" or "no".
Posted by Vixen Strangely at 12:17 AM

Wouldn't want to hurt the little boys' fefes, now would we?