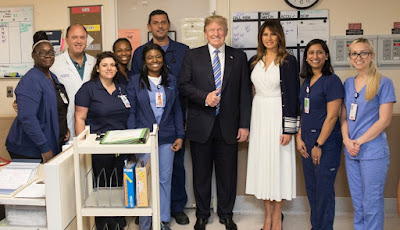 Trump and his First Lady made a quick visit to see Parkland shooting victims at a local hospital and I just wanted everyone to note that Melania is dressed like she's Cherry Ames, Student Nurse, or something. Which is basically how one would do things for a photo op. Donald Trump has his waist-high thumbs-up. They have successfully made sympathetic rounds and can go to Mar-a-Lago.

This might sound incredibly cynical, but I am just pointing out that this is kind of a photo op thing. He will not do anything about violence or "American carnage" because the NRA is a significant shareholder in Trump White House, Inc. Because Trump is not a person who knows a lot about politics, he believes this looks good.

I think it looks like a politician made a necessary tour of a place where government policies failed hard, and thought that would pacify someone. But that is a dumb thing for the politician to do if he has no actual plan.

I still don't even know what this clown is doing in response to his promises to the survivors and loved ones of the fallen at the Orlando shooting, when he promised us he would protect LGBT folks.  He fails at this. (Pence remains his VP, the plight of gay folks and POC, especially Latinx, remains a concern.) No one is safer. What in the world has he done but lift up evangelicals who hate gays and encourage bigotry?

He likes to show up places and promise things to people who desperately want something better. But he doesn't know that violence is facilitated when people feel like violence is a great way to get things done because they see that in their world and read that in their media (and feel like their president encourages it), and they do violence better and harder when someone ensures they have access to the right killing tools.

It isn't just that I see Trump as singularly bad at empathy and being the one to comfort the wounded and shattered and in need of hope. It's that he is, as near as I can tell, the worst human to even ask to do one good thing about all the bad things.

He thinks being physically somewhere is enough. But he doesn't know how to stand in the place of someone who has lost anything, feel that loss, and come up with the way to make it better or righter.