When Things Don't Go His Way--Boom! 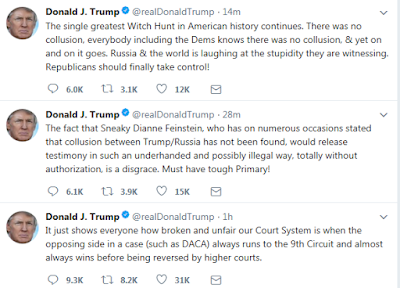 After President Trump's self-contradictory immigration meeting with legislators yesterday, the White House plan to end DACA was blocked by a judge. And when you put that together with the up-ending of part of his Dossier complaint by Senator Feinstein's release of the transcript of the Glenn Simpson interview-- why, you get Trump to go Boom! on Twitter again.


It's like Old Faithful in a way. Can't say I'd miss it if he stopped. Also, congratulations on the new nickname, "Sneaky Dianne Feinstein"! You're my kind of nasty woman!

Posted by Vixen Strangely at 10:38 AM