The Massacre of Innocents 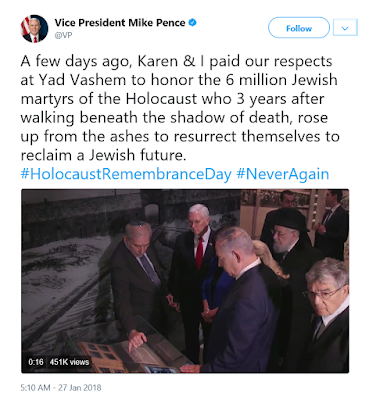 They never rose up. The dead of the Shoah will never rise again, and are remembered because their lives were disrupted by a great evil that cut off their existence. Their world was abruptly ended. They  at one time could not find livelihoods. They could not own property. They could live in some places--and then? They could not live at all. These people who were slowly erased from time, need to be understood as the victims of lies and propaganda that annihilated their humanity and then took their physical bodies. They were victims of lying. They were the victims of religious bigotry. Mike Pence, I believe, has a justification for why some humans should not live or be served by businesses for religious reasons. His pious claims are full of bullshit.

Zionism gave a homeland to other Jewish people--but it did not make the victims of the Shoah rise again. Nothing will. This is the wretchedness, the horror, of Vernichtung, the destruction or attempted destruction, the genocide, against the Jewish people enacted by the race-selective policies of the German nation. The dead rose from no ashes. They stayed as memories and were maybe remembered in the naming of babies, and as grainy photos, and in the stories of old people with tattoos on their arms and the dignity of remembered sorrow haunting their lives.

The race and sexual-orientation biases of a very particular strain of conservatism remind us of how near we always are to the horrors that the Nazis promised. Pence is the wrong one to try and tell us #Neveragain when he himself is a reminder that discrimination is everywhere, and eliminationism is happening right now.

Posted by Vixen Strangely at 1:55 AM

But that's different because, um, Jews are a demographic currently being targeted by the RNC and gay people, for the most part, aren't? (I'm not sure about that one, actually...)

Wait, I know. It's different because the Holocaust was in the past and, like Martin Luther King, history has already reached its seemingly irreversible judgment of it, whereas LGBT discrimination is still seen as defensible by a group of wealthy donors.

It is the nature of humanity. You can draw a direct line from the Armenians to the Jews to the Stalinist purges to Cambodia to Palestine.

Nobody learns, nobody stops, nobody cares. Everything is zero-sum, and that means killing the 'not-yous'. All of them.

The Kurds are up now, and at some point a million will die in South Asia, because for all of the intelligence evolved by the human species, there is a primitive, violent hatred mostly driven by fear of the other - and enhanced today by shrewd politicians who use another community or culture as the existential threat that makes their policies necessary to implement no matter how unpopular they might be....

Upwards of thirty-five million First Americans were put to the sword in the name of the jew christian dog in what we today think of as “America” alone, a genocide of many as one hundred million Humans Beings throughout the “western hemisphere”.