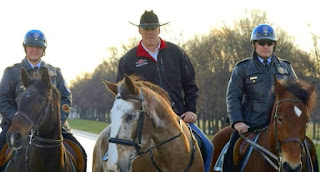 Interior Secretary Ryan Zinke would probably prefer people think about him as a rugged outdoors-type, as evidenced by his coming to work on the above steed, Tonto Silvershoes. And yet, he has definitely evidenced that he has a more, shall we say, "high-flying" side, with his own office challenge coin and flag ritual, and with his actual private flight preferences. Sometimes he has even combined his love of taxpayer-funded flight and horse-riding.

He would probably not prefer people think he and his office just make really stupid decisions about resource allocation, such as the decision this summer to spend nearly $40,000 from wildfire preparedness funds for a helicopter tour. Given the year we've had for wildfires, this looks pretty awful. Zinke's office indicated that the helicopter ride was charged to the wrong internal account in error, but there seems to be a trend, here.

It just seems to me would should have someone more careful of our government resources, managing the department overseeing our natural ones, and all evidence suggests natural resources will be poorly managed as well.
Posted by Vixen Strangely at 11:27 PM

New Jersey Cowboy, only lived in Montana long enough to get himself elected freshman congresscritter before Drumpf uck's appointment. If he's such a tough guy, a navy seal or some such last refuge of scoundrels bullshit, what's with the armed guards?