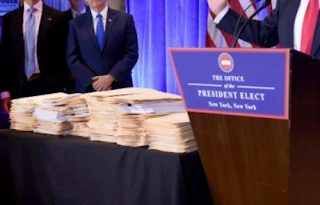 There's nothing better for democracy than good, old-fashioned transparency, am I right? When the government does the people's business, we surely hope they are going about their affairs in an above-board manner, and if there is anything amiss, we'd like to know that the fourth estate is on it. Or one would think that's how it should go, but Wednesday's presser was a shitshow, and does not bode well for the future relationship between a Trump Administration and the news media.

I'd like to draw your attention to the staging--there were props. (He has used props before.) The above file folders are supposed to represent all the paperwork involved in turning his business over to his sons. No journalist was able to look at them, and they are probably just filled with blank paper because this is obvious bullshit.  The Chief of the Office of Federal Ethics has derided the scheme as "wholly inadequate". Trump thoughtfully provided his lawyer to take questions regarding the set-up, but she is not a constitutional lawyer and seems to be under the impression that "emoluments" is something more like gifts or profits and not just payments in general from foreign interests. Just owning his business is a problem--especially since you can't miss assets that have his name on a big sign overtop of them. And do we really expect him not to talk shop with the lads? Also, because this is Trumplandia, his lawyer's firm won Russia's law firm of the year. It just feels wrong not to point that out as a weird coincidence, even if its significance is sketchy.

You want transparency? Meh. He's not giving up tax returns, and if you want to know whether any of his campaign or transition staff have ties to Russia, you're either history's greatest monster or something from Nazi Germany. And in light of the media's coverage of the dossier regarding his potential compromised position by Russian intelligence, he's not really copacetic with the press right now, anyway--as in, well, had he been during his campaign?

Trump has demonized the press for just covering him and quoting him accurately.  His campaign on occasion outright banned certain outlets from coverage. His rhetoric and the zeal of his supporters against journos is highly worrisome--a threat to freedom of speech and to the lives and welfare of people who are just trying to cover the news. In his presser, Trump struck out at Buzzfeed, who published the dossier, and CNN, for reporting about it.  Chillingly, Buzzfeed was advised that they would "suffer the consequences" for reporting. Jim Acosta, of CNN, was threatened with ejection by Sean Spicer, who has opted to behave like a newly-hired nightclub bouncer trying to impress the boss.

So much of this would be viewed by folks like me as pretty hostile and not at all a great indicator of how well Team Trump is going to manage dealing with the press, handling ethics issues, or responding as if Trump was not actually a wholly-owned subsidiary of Putin Enterprises LTD.  (His protestations of "NO LINKS!" did not, actually, distract from the previous "hell yes, links" coverage previously uncovered. ) Also, Trump being unhinged, he revealed something that sounded exactly creepy--he assumes that in hotels, there are cameras everywhere.  He owns a mess of hotels! And there were reports he was bugging guests at Mar-a-Lago. (What is he trying to say--are his own properties some kind of Orwellian Total Information thing? Should one worry one's own stay might result in kompromat?)

No good communication happened. Trump had paid staff cheer and clap for him to create an atmosphere where he could seem to be "winning", even if a close review of what was actually happening didn't look positive at all. Maybe they were also there to audit who the "good ones were" amongst the paid ink-daubers? But the laughing of his paid audience, the empty files that make it look like he offered transparency, and the reflexive anti-media bias atmosphere he created made this circus satisfying for his fans. This is what they wanted. He reinforced their biases--he made himself appear the victim of a vicious news media that destroys people for just being conservative. (Poor Orange Snowflake!) He even ended the performance with the catchphrase of his reality tv show'' he implied that if his boys didn't manage his business well, he would be telling them "You're fired!" It was a show. A put-on.

Tragedy and farce are seldom so entwined.

Hi Vixen, I should apologize, because the last time I commented I signed myself as Anonymous. I was in a furious hurry and scarcely had time to dash off a comment. I see you are still out there trying to fight what I imagine you regard as the good fight.

I think that media followers are once again sliding back into that category of roughly 30 million people following politics, and the rest of the country paying little attention. I imagine that the controversies have picked up a few million, but the ridiculous nature of invented scandals have turned off millions more. I have to assert that none of the subjects being addressed by the media is of the slightest interest to Trump voters. Now Trump voters are going to begin to be very upset with him:
If he does not build the wall. If he does not bring trillions of dollars back from overseas to act as a fuel injection system for our economy and opportunity for upward mobility for all ethnic and racial groups. If he does not purge the US of illegal criminals who regularly prey on American citizen. If he does not put tariffs on American companies that move outside the US then sell back into American markets. If he does not revitalize the military and contribute to our security. If he does not establish eVerify and other measures designed to discourage illegal aliens from taking our jobs and pushing down labor wages. If he does not start extreme vetting in order to keep fanatical Islamic terrorists from coming into our country to kill our citizens and others.

I could go on, my point being that those of us who lean in the direction of what is colloquially called “the right” have a lot of issues that could turn us against Donald Trump. We do not regard presidents, whether left or right, as Caesar Augustus. We have security and prosperity concerns that are completely legitimate, and if Trump does not follow through on his promises, you might get another Democrat in 4 years because Trump will no longer be in our favor.

However, not any of the scandals that are being chewed over like a beaver working on a tree mean anything at all to us, and they amount to things we can easily ignore.

Used to be, gossip columnists were all about show business, but now we have a gossip industry surrounding politicians. Those of us voters who lean to what is stupidly called the right (abstractions in people's minds having little to do with reality) do not regard politicians as interesting enough people to follow like a fan club.

We will know in a couple of years whether Trump is really trying to carry out his promises. If over the next 2 or 3 years he increases our possibilities for prosperity and security for the United States, he will be a shoo-in for a second term.

I could go on, my point being that those of us who lean in the direction of what is colloquially called “the right” have a lot of issues that could turn us against Donald Trump. We do not regard presidents, whether left or right, as Caesar Augustus. We have security and prosperity concerns that are completely legitimate, and if Trump does not follow through on his promises, you might get another Democrat in 4 years because Trump will no longer be in our favor.

You have a point there--although I see strong core supporters as being in a kind of honeymoon phase where, as he stated, he could "shoot someone on 5th Ave" and get away with it--promises have been made. For my part, I think e-Verify is more useful than the Wall because the problem isn't that people are just here illegally--it's that they are working here when they aren't eligible to, and this problem rests with the employers who hire them. I feel weird as an Occupy Wall Street sympathizer to be citing Milton Friedman regarding tariffs, but I'm actually a bit of a free market fan and tend to agree with him that tariff schemes amount to a sort of price-rising pyramid game.

I also agree that the scandals noted in the dossier aren't necessarily harmful--his image weathered the sexual assault "grab them by the pussy" comments and subsequent accusers--among his core supporters. (Me, the feminist? Still very squicked out, thanks.) But the very idea of being compromised by a foreign power? That concerns me, and also makes me question who he chooses to surround himself with. If he has people who are compromised by any leverage, dirt, financial obligation that could make then not act in US national security interest? Big problem with me. I've been a Putin hawk for some time because his schtick is hard authoritarianism, oligarchy, dividing Europe by playing off of nationalist sentiment, and journalist and political opponent-assassinating (as Marco Rubio pointed out in the Tillerson hearing) expediency. I'm in no hurry to support a relationship I which I see no mutuality, and forget about partnering to squash ISIS. They ain't about it in Syria. They just want to prop up Assad who is a total thug.

Greetings, Vivacious. Ordinarily I would agree with you, as I prefer free markets as well. However, our present situation is somewhat like Man A is smacking Man B in the face, but Man B does not fight back because he does not believe in violence. We're only able to have free markets when all parties are entering into the arrangement in good faith. So I am pleased that Trump does not hesitate to use what normally is thought of as a Democratic solution. I think he is well aware of the realities of the situation and doesn't hesitate to implement a solution even though some people in his own party balked at the idea. It is possible that simply offering the threat will be enough to keep companies from fleeing the US. The feedback we have had already from a number of companies in response to the president-elect's initiative is a good sign than many companies would prefer to support the United States and have now been given a reason to do so.